MAXIM DONDYUK
INTERVIEW AND PHOTOGRAPHS
This photo essay contains graphic images. The interview has been edited for length and clarity. 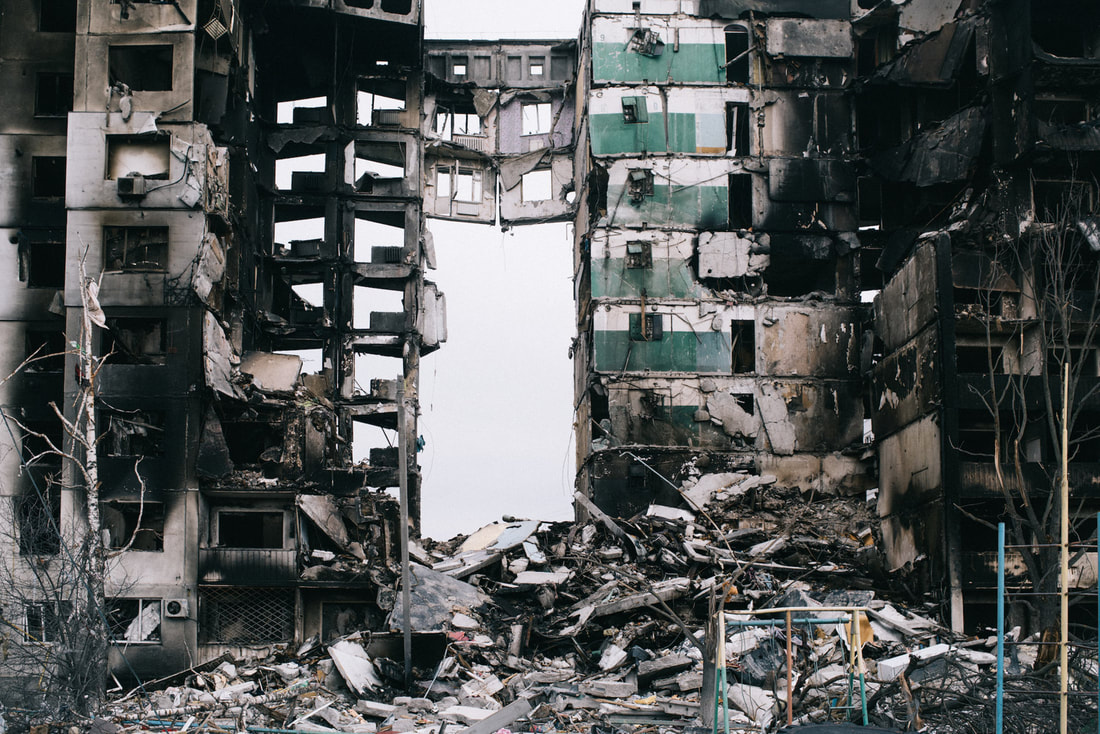 The town of Borodyanka may have faced some the worst attacks since Russia launched its invasion of Ukraine. Although the Ukrainian army regained control of Borodyanka, it is now a "ruined town" strewn with destroyed buildings and burnt armored vehicles. School buildings, homes and apartments in the town center were severely damaged as a result of air and ground strikes. Borodyanka, Kyiv, April 5, 2022. © Maxim Dondyuk
This interview with Maxim Dondyuk and his wife Irina Dondyuk was conducted via Zoom on June 8, 2022.

​Truth in Photography: Do you feel a sense of fatigue? It seems with the day to day demands your life at risk. Do you feel like you have trauma fatigue from what you've been experiencing?

Maxim Dondyuk: Yeah. I'm exhausted, and not only physically but also mentally. Sometimes I cannot see pictures because I just work nonstop. I definitely need some rest. Maybe a few weeks, maybe months. Because it becomes harder and harder every day.

TiP: Do you work for an agency, or do you work independently?

Dondyuk: During this war, I worked with two magazines: TIME magazine and the German magazine SPIEGEL. Mostly with SPIEGEL. I have a lot of freedom, and I mainly don’t work with a journalist. Sometimes I travel with a journalist, but mostly they give me a lot of freedom. So they support me and I can continue covering this historical moment. And they also use my pictures and it's a good collaboration. 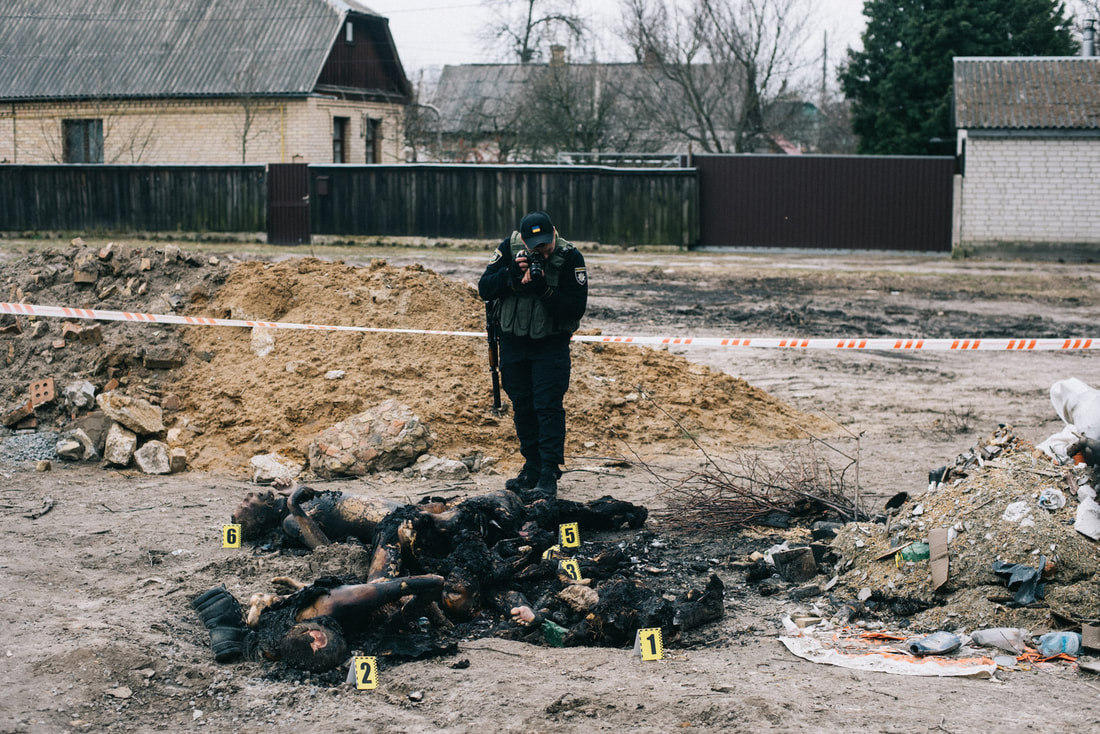 Russian soldiers brought on their tank 6 dead bodies of men, women and two children, on the trash, put some rags on their heads, so that no one could identify them, and tried to completely burn them. Bucha, Kyiv, April 5, 2022. © Maxim Dondyuk
TiP: In terms of determining where you're going, do you decide or is someone sending you someplace?

Dondyuk: Mostly I decide where I want to go, sometimes we decide with a writer. It depends on the situation and events.

TiP: How do you decide what you want to do? What are you responding to?

Dondyuk: At the very beginning I was based only in Kyiv. For me, it was important to capture how Russia was trying to seize the capital. After that, I started to move around other cities as well, capturing their destructions. Sometimes I stay several weeks in one area, sometimes a few days, everything depends on how events unfold. I’ve already been to Kharkiv, Donbas, South region, and Chernihiv region. It’s a lot of traveling now.

TiP: What is it like traveling? It must be dangerous.

Dondyuk: It's not like you think, I'm not traveling very close to the front line. It’s very complicated because the Ukrainian army tries to close every door for any photographer and for media. Before nobody controlled the front line so you could go through the Ukrainian line, you could go to the Russian side, and nobody would stop you. It was at your own risk. And now if you go ten kilometers near a front-line checkpoint with Ukrainian soldiers, they stop you. And if you don't have permission and travel alone without Ukrainian soldiers, it’s not possible to go to the front line. So now it's too complicated to cover the front line because you need a lot of preparation and access, unfortunately.

TiP: Why do you think they've taken this position?

Dondyuk: Because they cannot control the media, they cannot control photographers. And for them, it's a better decision to just close access for everybody. It’s a lot of bureaucracy because some commanders say, “Yes, you can do what you want,” and some commanders say no. So, all the time you have to build relationships. The army doesn't want to share any information, they don't want photographers to take pictures. They're afraid that some photographers use GPS trackers. So it's better just to give no access. And it's really hard.
TiP: What's your feeling about the way things are going?

Dondyuk: I stay in Ukraine close to the front line and I can say how people who are on the front line in Ukraine feel. It looks like the Western government, the European Union, and America, don't care about the whole country. For them, it would be okay for Ukraine to be divided into two parts: east and west. Of course, I understand that they want to support us, but unfortunately, we need more heavy weapons for liberation operations. We don’t have enough weapons even to resist.

TiP: The people you interact with, do they still have hope?

Dondyuk: Now it's a completely different mood. Everybody - children, women, soldiers - understands that this war is a long-lasting battle. And everyone is already used to living in the realities of war. When I hear shelling now, I see women with children walking on the street, not afraid and not going to the shelters. Unfortunately, there might be bad consequences, but now everybody understands we will live like this for a long period. Before there was panic. Everybody dreamed that this war would finish in one month or a few weeks, that European countries would protect us. But now everyone understands it's our duty to resist. And a lot of people are coming back to Ukraine during the war, ready to support the army and support the government. Businesses are coming back, and we’re just trying to strengthen our country and resist for a long time. Everybody are like soldiers, preparing to resist and ready to die. Unfortunately, or fortunately, I don't know. 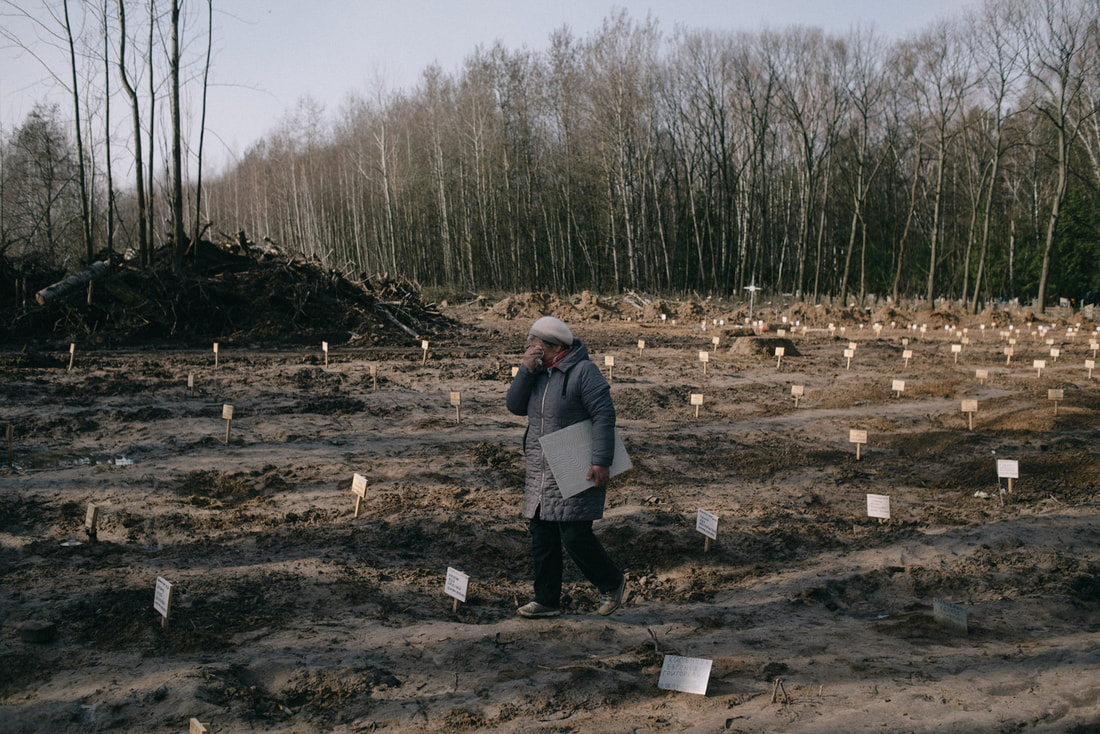 Because of intense shelling and air strikes, people had to bury those who died in long ditches in a hurry, putting a sign with the name near each body. After the battles ended and the city was released from the Russian Army, people return to the city and try to find their relatives on this cemetery. Chernihiv, April 10, 2022. © Maxim Dondyuk
TiP: What motivates you to make the photographs you make? What do you hope will be the response to them?

Dondyuk: For me, it is important to be alive first, and I try to find a way to showcase this story more deeply, not like action or news, but as a long deep project. It will not be a short war. And I need to find a perspective to share this war, not through media, because the media might stop being interested in it. So I think about personal exhibitions, photobooks. I just need to find a deeper way to cover this war and share it.

TiP: Irina, tell me about your life. This must be difficult for you, having your husband away for three and a half months. You seem to coordinate so much of managing the images. How many images are there now?

Irina Dondyuk: Oh, there are a lot of images. And of course, it’s not me alone who works with these images and who makes selections. It's Maxim in the first place. And then I make the second selection when I choose what exact images to send to the magazines or to exhibitions, etc. It's still difficult emotionally because of this feeling of the war, it's always with you. It's not just short-term, it's a long-term war. And it's very depressing that you can't have a normal life. You can’t just travel; you can’t just enjoy your life like it was before. My work as a manager, speaking with the magazines, replying to all these messages, preparing exhibitions, etc., it's very exhausting stuff sometimes, because you immerse yourself in all this so deeply, and all the feelings you have are all so very touching. And sometimes I cry, sometimes I’m shaking. It's quite difficult, and of course, it's quite difficult not to see him, because for the last three years we spent every day together. So it’s quite strange sometimes. 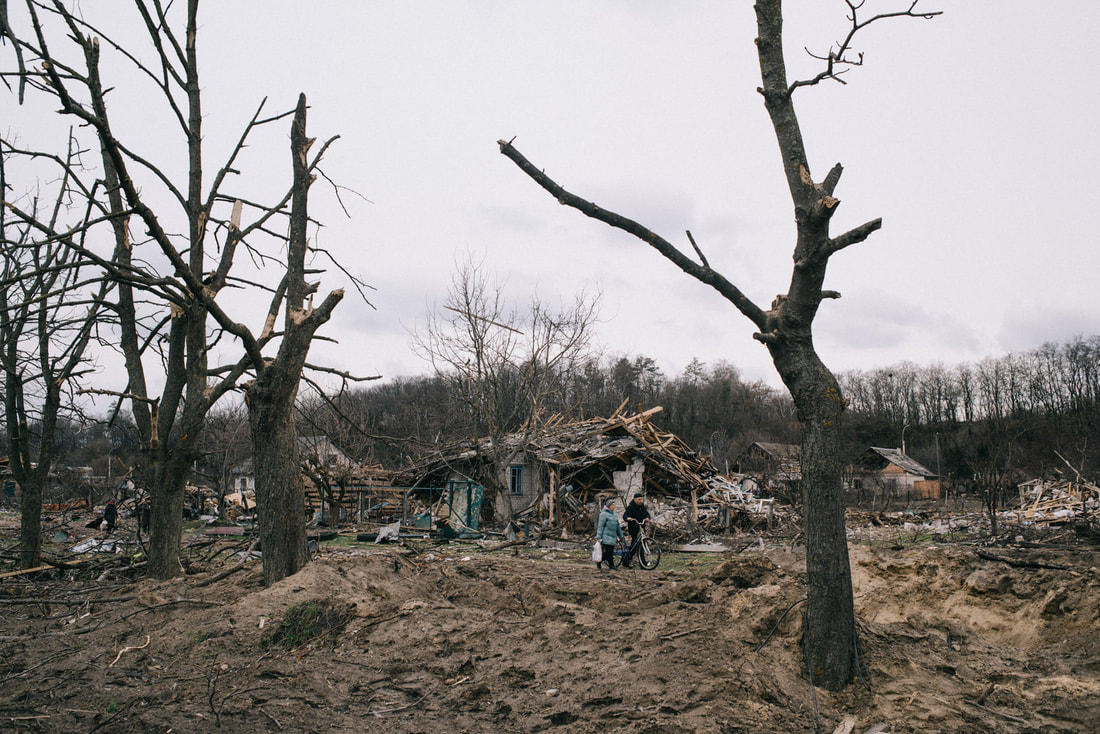 The consequences of numerous air strikes and shelling of the village, which was on the front line during the defense of Chernihiv. Novoselky village, Chernihiv, April 10, 2022. © Maxim Dondyuk
TiP: Clearly truth is a shifting landscape for some people. But do you feel that your attitudes toward truths of what you're seeing and what you're photographing have changed? That over this period you've been photographing this war, all this has become something other than what you thought?

Dondyuk: But we need to remember that truth has too many sides. All people have different backgrounds with different personalities. You can see the same situation from a different point of view. And sometimes my truth is not the truth that other people see. I try to explain my personal truth, but for somebody, I will be like a liar because they see the same situation from a completely different perspective. So, it’s too complicated to say that I or another photographer can share truth, because I take pictures from my background, my perspectives, and my point of view. It’s subjective. I change it, I cut a lot of subjects and situations and if you would see the whole picture, it could have a completely different meaning. But I decide what I want to show, and I create my personal truth. But it's not the same truth as a guy with a different perspective, different intelligence, or mind would see standing near me. Because of this, every photographer makes different pictures, or every writer writes different stories talking with the same guy. 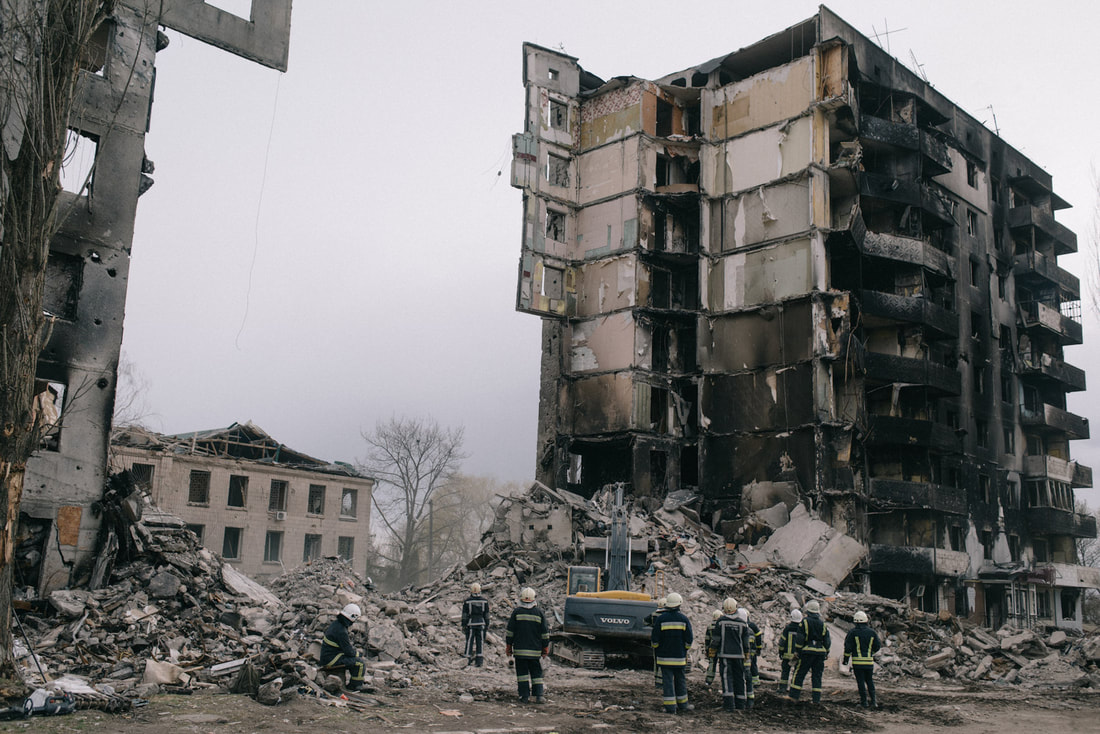 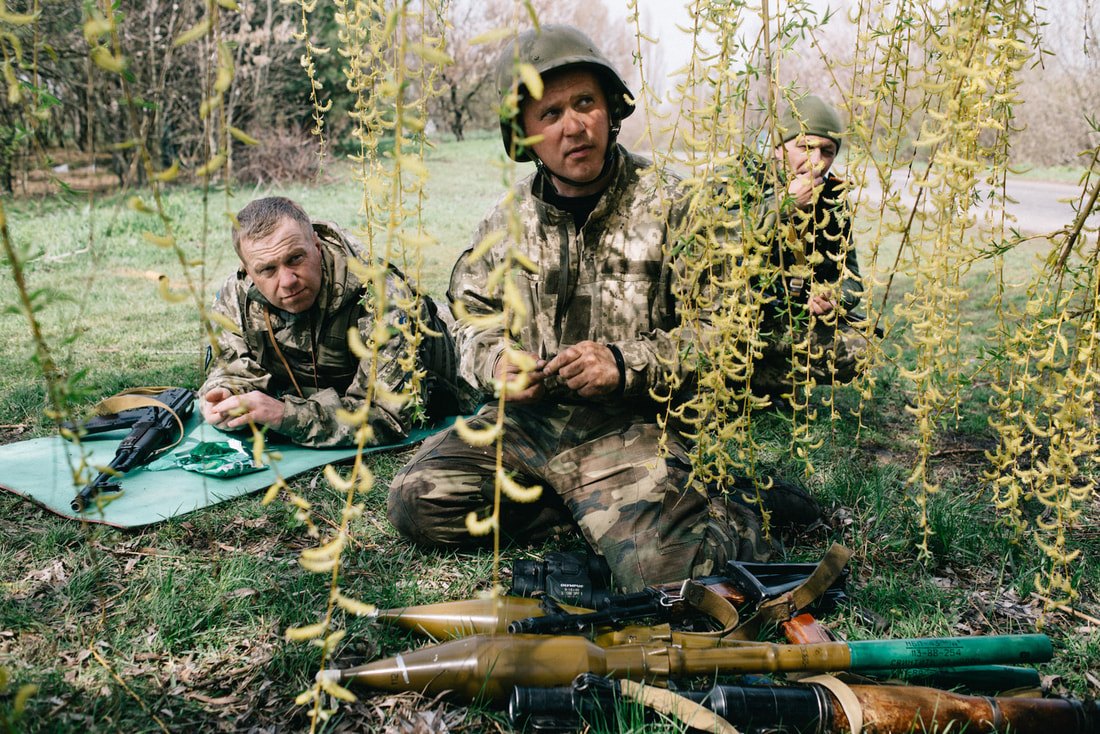 In the background on the left is Andrii Bystrik. A small group of Ukrainian military sitting under a willow observers the movement of Russian machinery. This village was under the control of the Ukrainian army, but at night after a massive bombardment, the Ukrainian army retreated, and now there are no Russians or Ukrainians in the village, but the Russian army is trying to seize this village, not knowing that there is no Ukrainian army. The Ukrainian military waits for reinforcements on the outskirts of the village, and in case of an attack from the Russian side or detection of Russian machinery they are ready to open fire. This is a gray zone, which is not controlled by the Ukrainian Army. Donetsk region, April 18, 2022. © Maxim Dondyuk 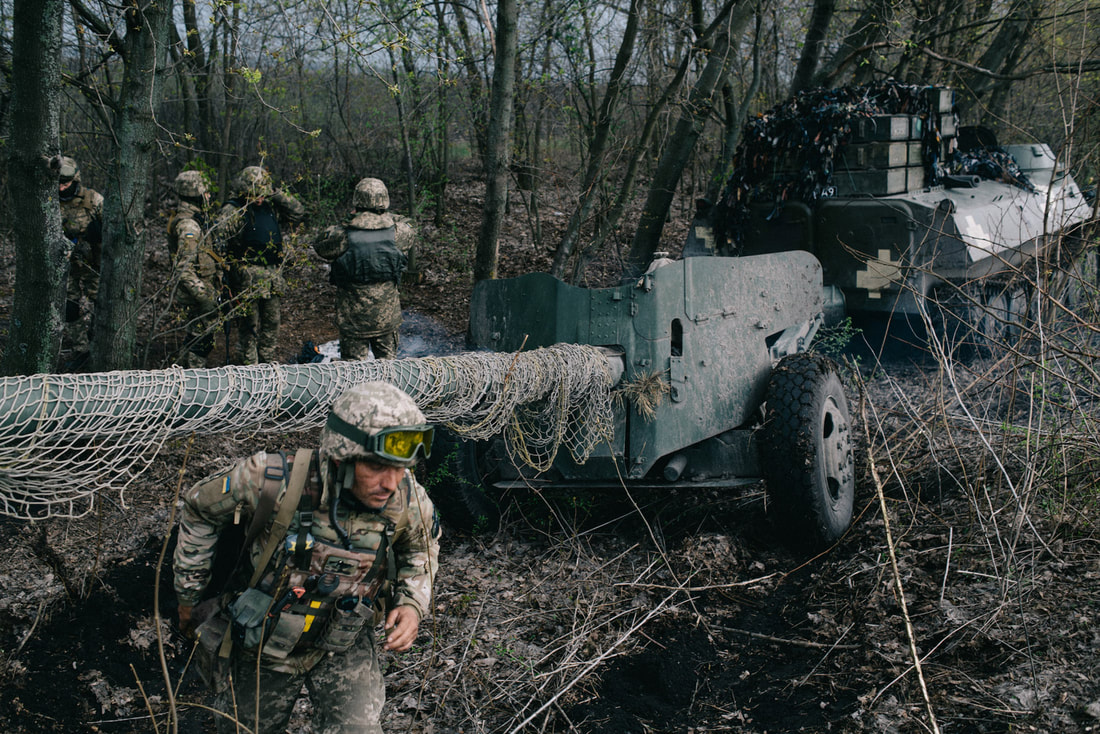 Ukrainian soldiers and machinery on the flank march moving towards a Ukrainian village to liberate it from Russian Army. Donetsk region, April 18, 2022. © Maxim Dondyuk 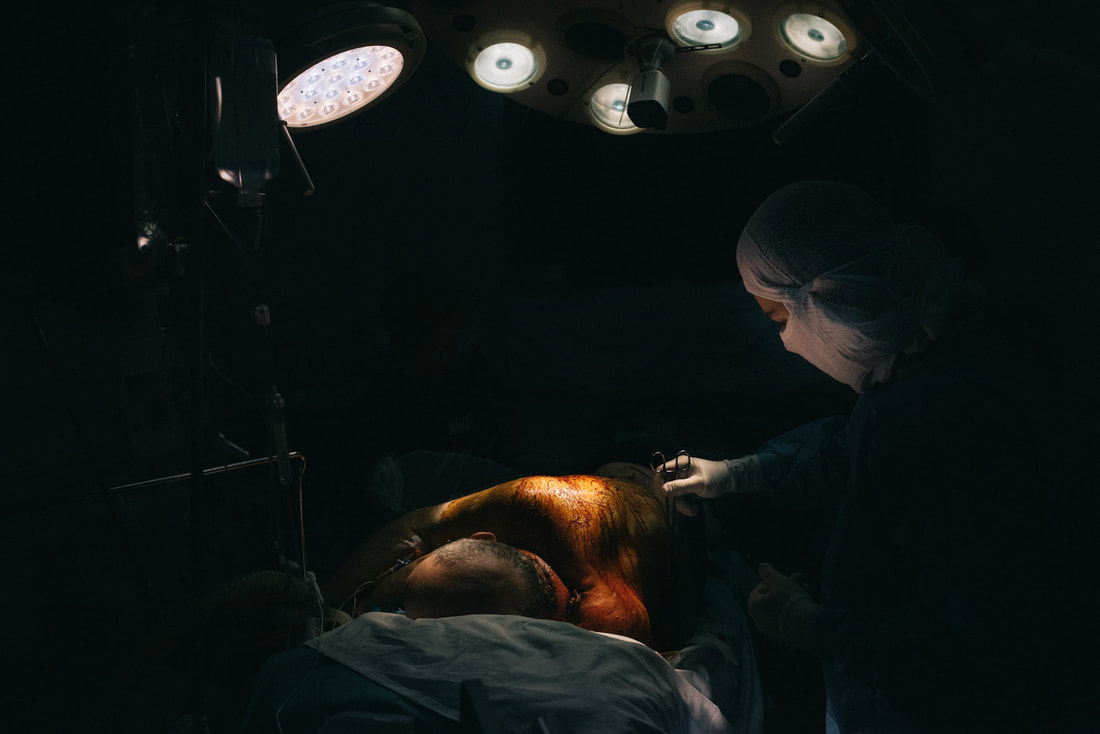 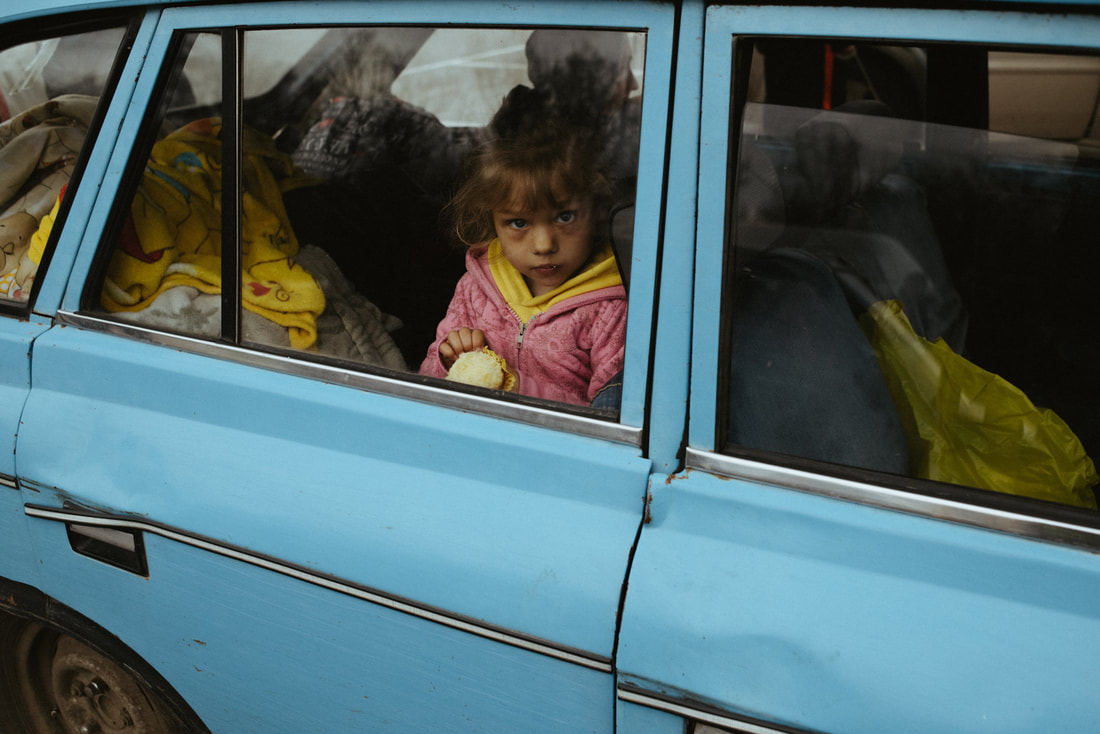 People sit in a car after arriving from Mariupol at the evacuation point in Zaporizhzhia, Ukraine, on April 23, 2022. Thousands of people who still remained trapped in Mariupol and others occupied by the Russian army areas in South Ukraine wait to be evacuated to Ukraine's controlled area by buses and their own cars. © Maxim Dondyuk 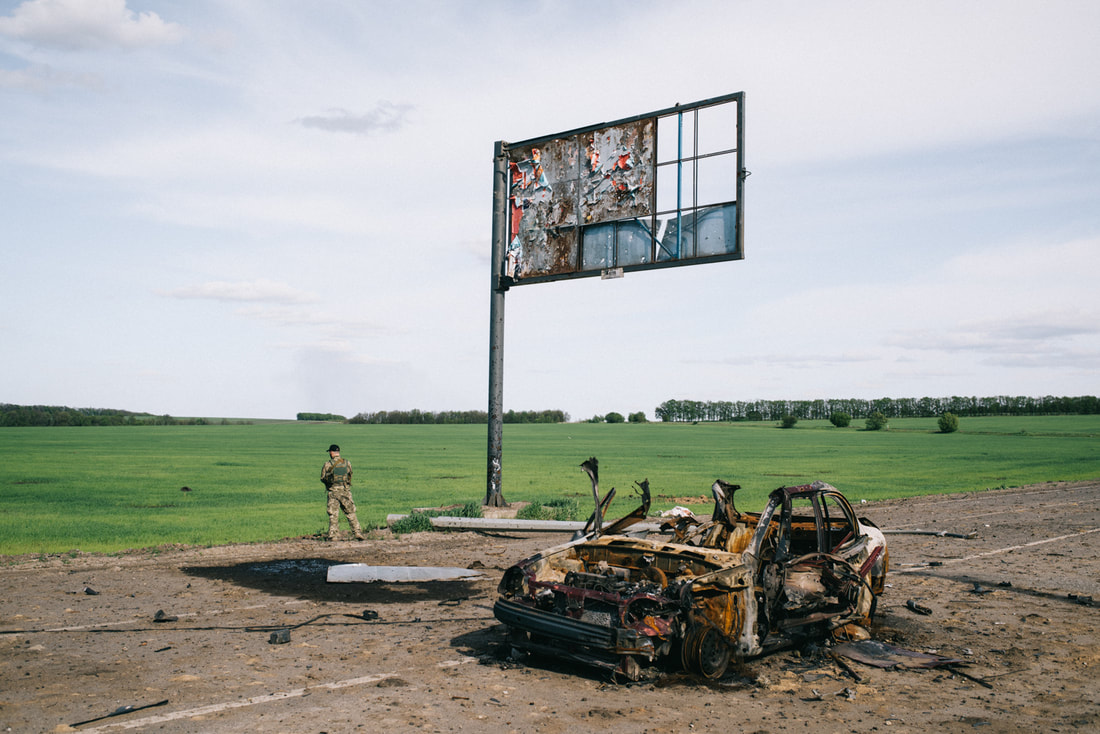 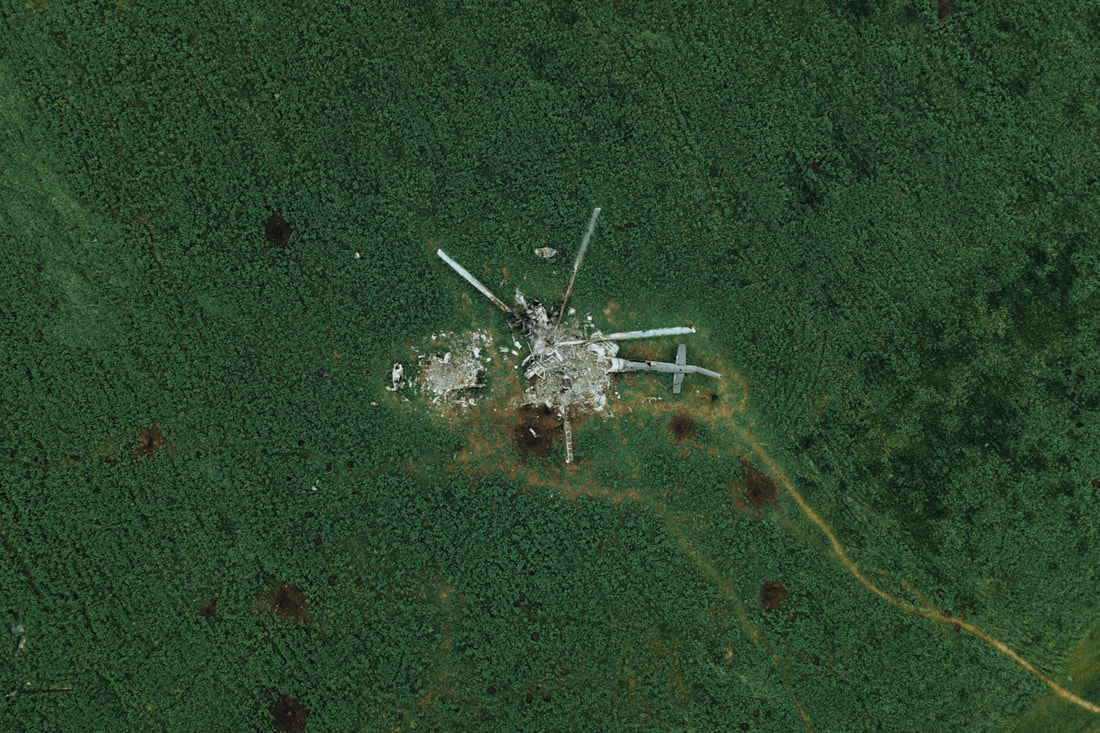 Debris of a burned helicopter in Mala Rohan' village near Kharkiv, Ukraine, May 15, 2022. © Maxim Dondyuk
RETURN