The truth of photographic images has been challenged since the 19th century when the means for making them were invented. While the medium was embraced by the public at large, photographers grappled with the methods and techniques available to them, experimenting with technologies as they emerged and discovering the capacity of the medium to represent the world they experienced.

Photographs are inherently subjective in the ways in which they are made and perceived. There is no absolute truth in the photographic image. Photographers frame the reality that they see, whether the process is spontaneous or planned.

The truth of photography relies not only on the integrity of the image, but on its accessibility. If truth in image making is a commodity, how much is it worth, and how do we determine its value?

The exhibitions can be viewed in sequence or in whichever order the viewer chooses. Select a theme from the menu bar at the top of the page, or click one of the buttons below.​​

LOOKING FOR TRUTH IN A DIGITAL AGE

Truth in photography is a constantly evolving landscape. What we perceive as truth today may appear to be fiction tomorrow. The way in which we frame the truth depends on time, place, composition, and point of view. The amount of visual documentation of the killing of George Floyd is staggering, from cell phone videos and photographs to bodycam footage and surveillance recordings from the grocery store where he allegedly cashed a counterfeit twenty dollar bill. What makes us believe or trust the veracity of an image is contingent not only on factual details, but on how it makes us feel. Truth is intangible.
In this installment of Looking for Truth in a Digital Age, we feature:

The Struggle for Gun Control

DEMOCRATIZATION OF THE CAMERA

The Brownie Camera, introduced by the Eastman Kodak Company in 1900, democratized photography. Low-cost, light weight and efficient, the Brownie was the cell phone camera of its day. Anyone could be a photographer. The snapshot quickly became a new visual language that was expressive, informative, and widely accessible. 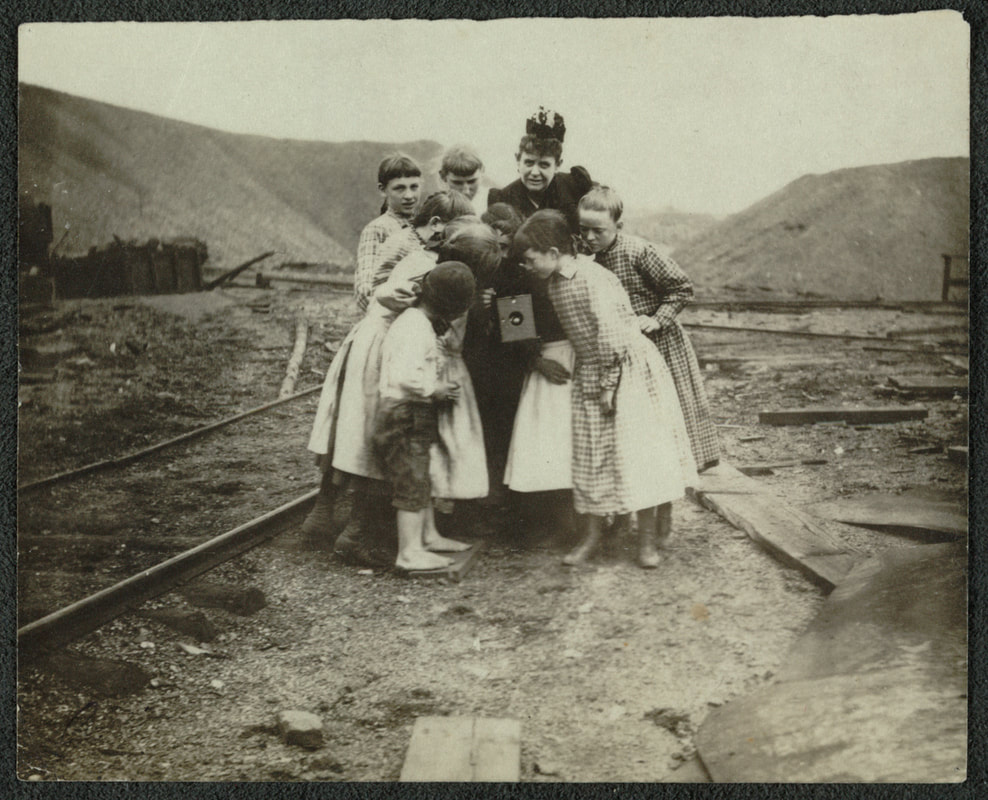 Frances Benjamin Johnston with a group of children looking at her Kodak Brownie camera, ca. 1900. Courtesy Library of Congress.
The Brownie camera was used both personally and professionally. It was a portable camera that could be used by trained journalists as well as by individuals with no photographic experience.
In her self-portrait titled “New Woman,” Johnston styles herself as a liberated woman, with petticoats showing and beer stein in hand, and at the time appears to mimic the portrayal of the New Woman in advertising during the period 1890-1910.

From the Brownie to the Polaroid to the iPhone, ever-evolving technological advances have brought the camera into the hands of more and more people worldwide. Over 5.13 billion of the estimated 7.9 billion people in the world own cell phones. The number who use their phones as cameras is incalculable, as is the number who own some other form of camera.

​Citizen journalism is energized by public engagement, whether written, visual, or virtual. In photography, citizen journalists are often ordinary people, who today may have a cell phone but historically might have had a Brownie or Polaroid camera. But to simply define citizen photojournalists as amateurs misses the crucial point that the images made at a time of crisis are propelled more by the urgency of the moment than the training of the maker. Being at the right place at the right time is everything. The capacity to convey truth depends on the honesty of the photographer, whether amateur or professional. Clearly, framing and composition affect perception, but the truth lies ultimately in the experience, the interaction between the subject and the photographer, and the context through which images are made and distributed.

In today’s world, cell phone cameras are able to create visual reportage from any place in the world, from scenes of catastrophic disasters, caused by hurricanes, tornadoes and tsunamis, to scenes of terrorism, police brutality, and social and political protest and unrest. The work of citizen journalists can be quickly disseminated, using websites, blogs, and social media.
The photographs featured here all express the core impulse of citizen journalism, the need to document the world around us at an important moment of time: the photographs of Henryk Ross of the Lodz Ghetto in 1943, Mary Moorman’s polaroid of the assassination of John F. Kennedy, the snapshots made at polling places in 2007, Corky Lee’s photographs of police brutality and the daily life of Asian Americans, the Black Lives Matter protests from the viewpoint of teenager Fanta Diop, and photos made on January 6, 2021 by Flickr photographer Brett Davis juxtaposed with Magnum photographer Peter van Agtmael.

On November 22, 1963, U.S. President John F. Kennedy was assassinated in Dallas, Texas. Mary Ann Moorman was standing on the side of Elm Street in Dealey Plaza across from what is now called “the grassy knoll.” She had brought her polaroid camera to photograph the motorcade for her son, and as it was passing by, she unknowingly made a photograph of the fatal head shot that killed President Kennedy.