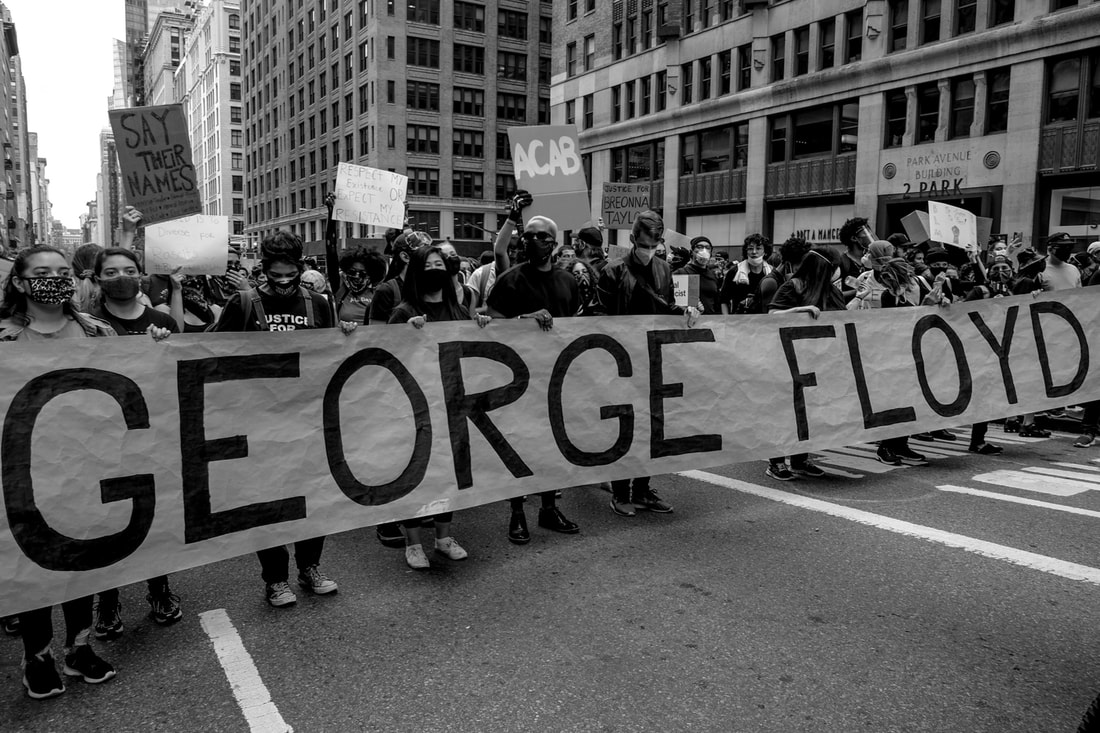 Protestors peacefully marched from Union Square all the way to 86th Street in New York City to protest for Black Lives Matter and against police brutality after the murder of George Floyd. June 2, 2020.
I can still remember the first protest I attended. My mom took me to a march after the murder of Trayvon Martin in 2012. At the time I couldn’t comprehend why we were all gathered and why everyone was so angry for someone we didn’t know. I’ve recently come to realize that deep down, they did know him. He looked like their sons, brothers, husbands, fathers…That’s what compelled them to leave their houses and march for him. Screaming his name through the streets, hoping that justice would be served. That his story would never be forgotten. They all shared a common feeling, an everlasting fear that someday they would be right back where they started except they yelled a new name this time. I never thought that I would be in the same position. Standing with the same scared people. The only thing that changed was me. It’s been 8 years since my first protest. Now that I’m older, I understand. The fear that my mom felt every day for her children, the reason why she didn't let us outside, the reason why she was always so paranoid: Trayvon Martin, Tamir Rice, Eric Garner, Amadou Diallo, Ahmaud Arbery, George Floyd, Breonna Taylor, Riah Milton, Dominique Fells--the list goes on, and she didn’t want our names to be next.
​
So, when the protests following George Floyd’s murder began I knew I had to be there. I was aware that I couldn’t donate. I knew I didn’t have a large enough platform to raise awareness, but I could photograph. I could be there and use my camera to amplify their story. I could document my experience and the experience of others while protesting for justice. That’s exactly what I did, I went nearly every day. I stood alongside thousands of people who were determined to make a lasting change, determined to bring justice to those who didn’t have a voice of their own and determined to put an end to the system of fear and oppression that countless people are silenced by.

Interview with Truth in Photography

Truth in Photography: Where do you feel the truth lies in your photographs? Talk a little bit about why you made the photos. What was it like making the photographs? And what did you hope would be the outcome of them?

Fanta Diop: The truth in my photography itself is my pictures. My favorite thing about photography is simply showing other people what I see and the world through my eyes. We’re doing documentary photography, which is super specific, and they teach us to take pictures of exactly what we see. We don’t alter it. We don’t interpret it in our own way. It’s what’s presented to us, and that’s how we capture it. So my photos of the protest were exactly what I was seeing at that moment. Making the photographs was mainly about me finding a way to cope and understand what was happening in my world, because I was still going to school during the time of the protests, and my school did not acknowledge it for the majority of it. We just never spoke about it, and it was taking a big toll on me and a bunch of my friends. I was just like, “I can’t sit here and listen and drone on about Roman history and Spanish when there are people fighting for our civil rights out on the streets, right in front of me. So I took it upon myself to go out every day after school, or sometimes even in the middle of school, and photograph the major protests that I saw as a way to just capture what my world around me looked like. It was a huge outlet for me, because I didn’t realize the emotional toll that the protests and the environment were taking on me as a person. And finally being in a space like that, where people were just expressing themselves in their truest form, whether it be through visual expressions, I have some pictures of some people doing visual art on the streets, and other people were just crying or screaming their lungs out. I was just glad to be in a space where I could capture those people in their natural state.

TiP: What were you feeling at the time you were making the photographs?

Diop: All I can remember at that time was that I felt incredibly overwhelmed just in all aspects of it. It was the end of my junior year. I was trying to apply to college. There were huge uprisings in my city, and I was still trying to focus on online school, which was incredibly difficult. I was just so overwhelmed at the time, and I didn’t have another outlet. At school we weren’t talking about it. I felt like I couldn’t connect with my mom. She’s from a different time almost. She was more focused on going to work, trying to survive during the pandemic. We weren’t on the same playing field at that time, so I just felt super alone. And I realized that going to the protests made me feel like I was a part of something. Even though I wasn’t personally advocating for something, I was still part of a larger movement through my photographs. It just took a lot of the isolation and the feeling of anxiety away.
​(click on an image to see it larger and view its caption) 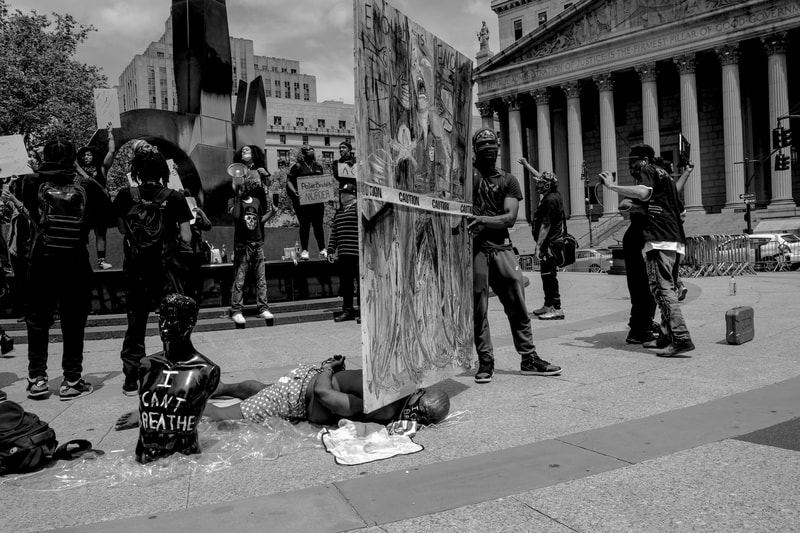 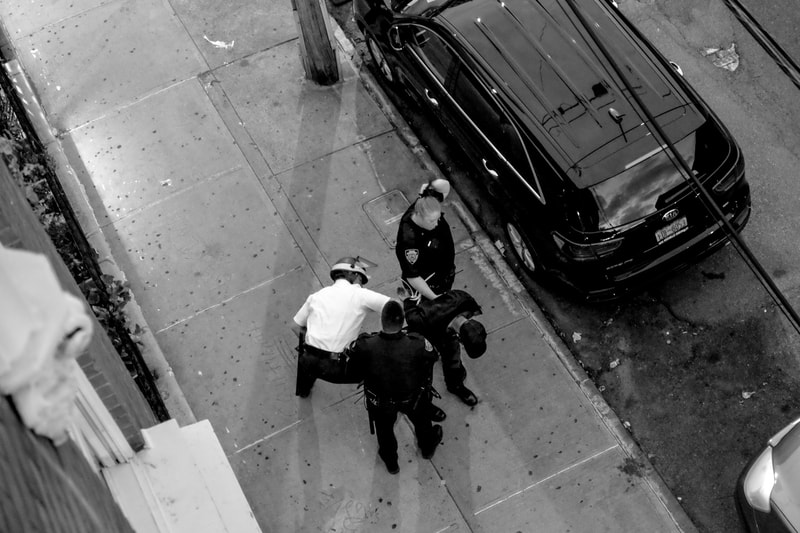 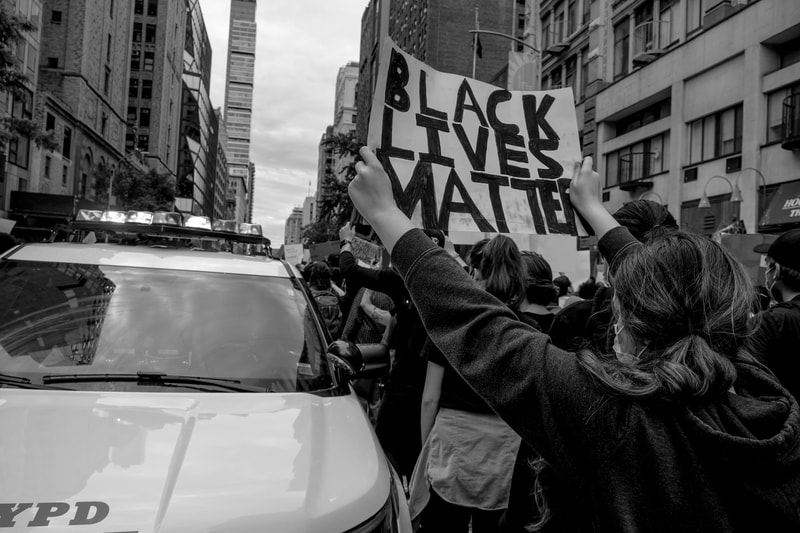 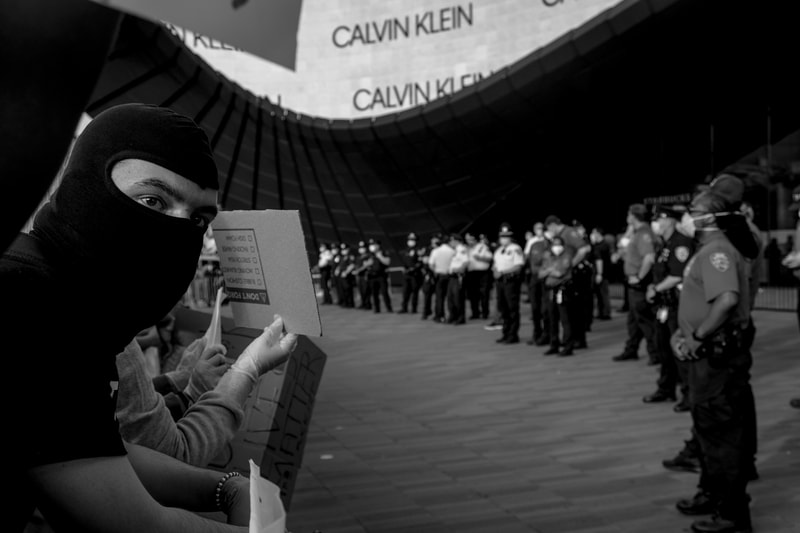 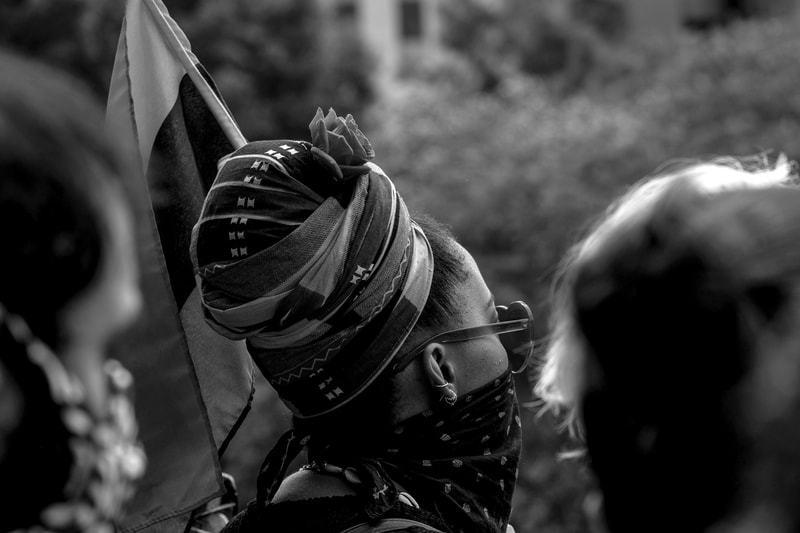 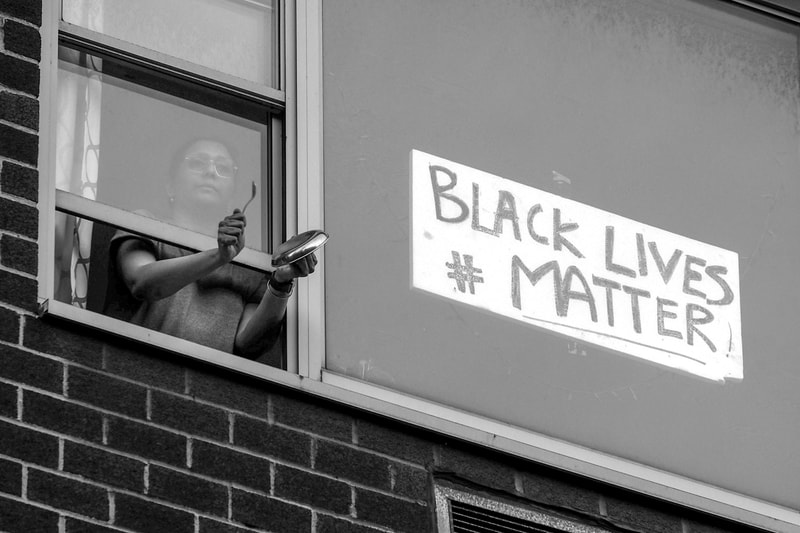 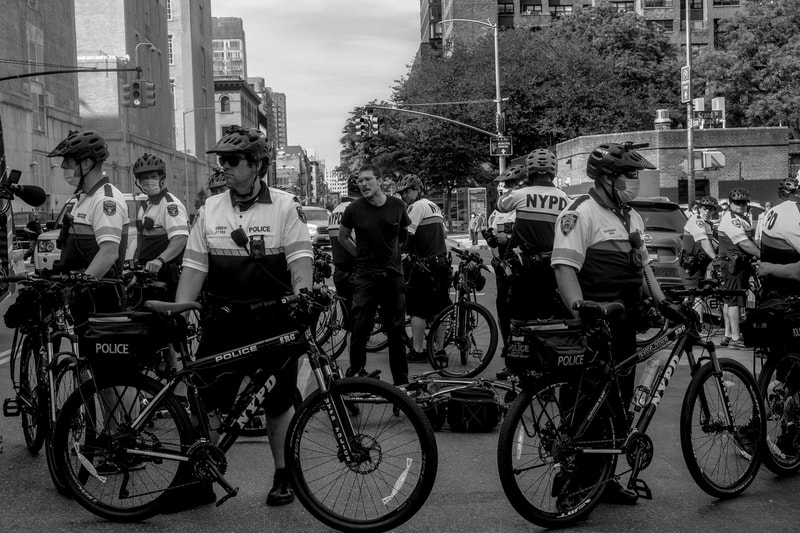 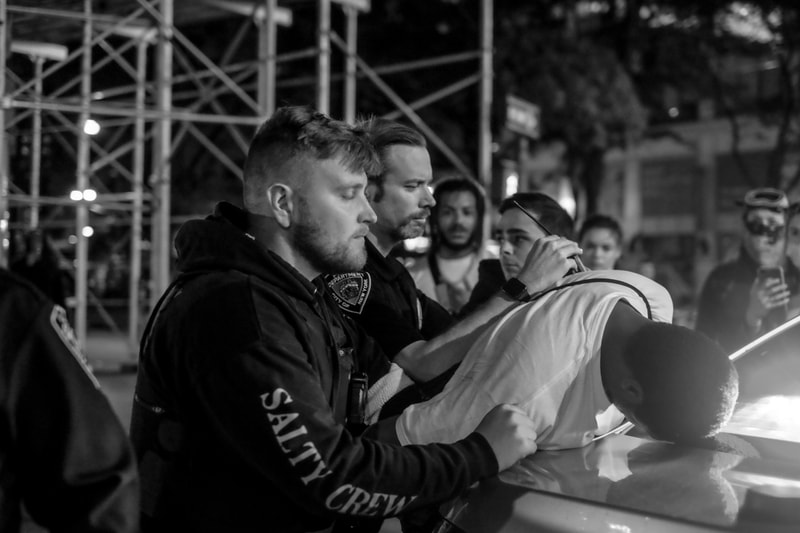 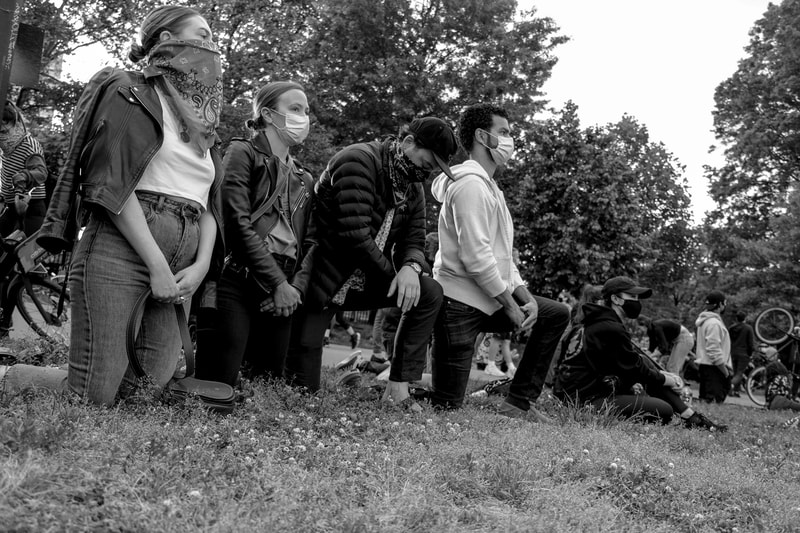 Diop: For the most part, no. I think this project kind of follows my usual guidelines of how I do most of my photography projects. I find an interest, and I just go. I never think about what I’m going to do. Whatever comes to me, comes to me. But this project itself really embodies that because I literally went out every single day without a thought in my mind. I just went to go be where I wanted to be and whatever I captured was what I brought back with me. Often, a lot of the spaces I was in, I had no idea who was there. I often had the BDC teacher Cynthia come with me. And there was once where I had my older sister bring me to a protest. But it was mainly complete and utter strangers. And I was on the sidelines just observing them and how they were reacting to the entire world at that time. Often the people I was photographing were people I had no idea who they were. And I never saw them again. I didn’t see them at other protests.

TiP: Did you feel when you were making the photographs that you had the consent of the people you were photographing?

Diop: That’s a great question, and that was something I actually really thought about before I posted any of the pictures to my personal Instagram, or when I was compiling my edit for the project. And I came up with the idea of, the people were in the streets because they wanted to be seen, they wanted to be heard. And they had a message to share, and I just felt like I was a part of amplifying their message. One of my biggest things is I try to photograph people who are partly concealed. If there was something I could do to hide their identity- I wasn’t just going into people’s faces and taking pictures of them. But there was something that I did notice. A lot of people who saw me photographing would look me in my eyes and look at the camera. There were a bunch of photos that I had of that that I sadly didn’t include in the edit, but I kind of felt like there was this sort of acknowledgement, especially with those who looked right at me and kind of stopped for a second to let me capture whatever photo I was taking. In the form of consent, I feel like there was some sort of understanding. It may not have been verbal, but I kind of understood that they were comfortable with having their photo taken. And there were others who, if they looked at me and turned around, I would just leave that alone. But for the most part, I feel like a lot of people were completely comfortable with having their photos taken. 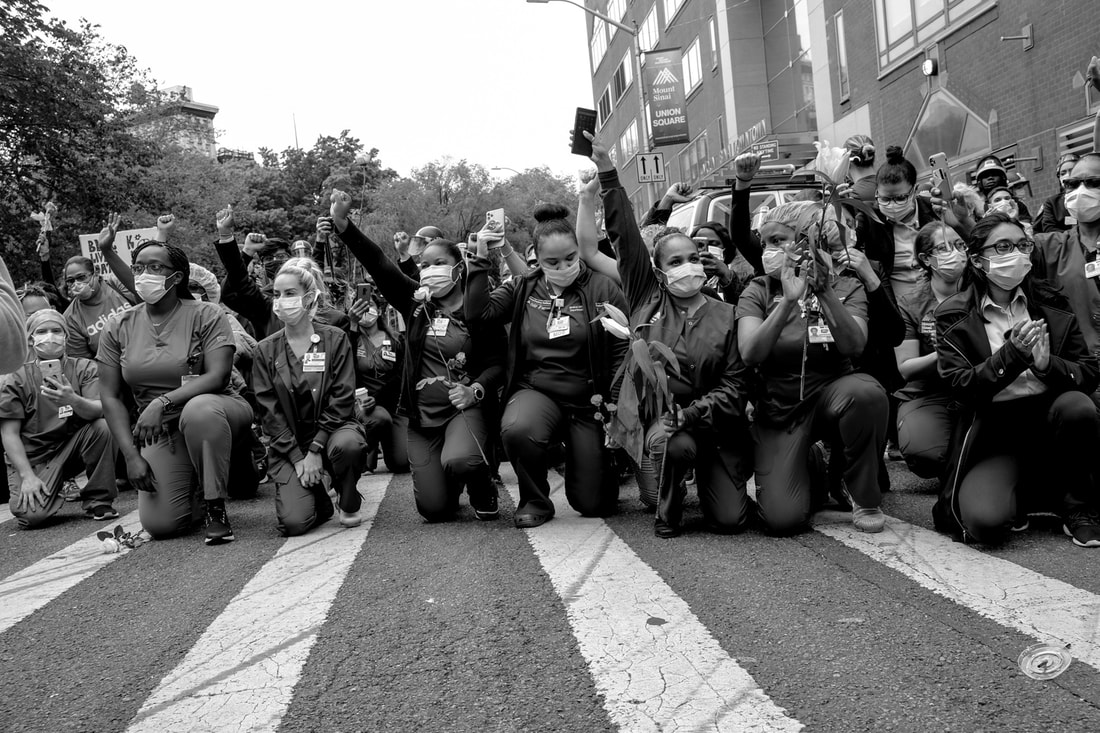 Protestors peacefully marched from Union Square all the way to 86th Street in New York City to protest for Black Lives Matter and against police brutality after the murder of George Floyd. June 2, 2020. © Fanta Diop / Bronx Documentary Center
TiP: What was your hope in the outcome of your pictures? Did you have a feeling of what you hoped they would communicate to others?

Diop: Initially my whole purpose of starting the project was actually quite selfish. I really went out to take pictures for me and for my mental health and for my sake. So I really wasn’t thinking about what my message or what I was portraying to other people was. When I went into those protests and I went into those spaces, I just wanted to be a part of something. My tool to be a part of these specific protests was my camera. I didn’t initially think that I was trying to portray some sort of agenda, but after I went over my photos and I looked at them, I think a lot of them just show really, really intense emotion and feeling. That was the biggest thing that I took away from my own photos. Removing myself from the energy of being in the protests, looking at them with my teachers, I realized I kind of paused this buzzing energy that I felt with everyone that I was around. It was just so energetic all the time, and I feel like a lot of the photos have that sort of abundance of emotion and feeling. That’s essentially what I hope people would get from that, because that was my own personal interpretation so I hope other people gather that, too.

TiP: Do you intend to pursue a career as a photographer? What are your goals?

Diop: My parents are Malian, and I visit Mali as much as I can. There’s a huge disparity between the education that young girls get in Mali and the education that’s provided to young men. It’s something that really struck me. I personally really love learning about things. Being there, and just seeing that these girls didn’t even have the option of whether or not they could be educated. It wasn’t something people thought was normal. I don’t know how to describe this, but there’s a maid system, where if you’re from the city you’ll hire some girls who live in the countryside to come work for you full-time. There’s this classist idea that the girls who are from the countryside don’t need an education, they don’t need to learn how to read or write, because all they are going to do is work for you and then get married.
RETURN