AFTER CONFLICT:
​AFGHAN REFUGEES IN TURKEY

CONVERSATION WITH EMIN ÖZMEN
PHOTOGRAPHS BY EMIN ÖZMEN
​The Taliban campaign to seize Afghanistan following the withdrawal of US forces has resulted in a new refugee crisis. ​Fleeing the Taliban advance, the number of Afghan migrants arriving in Turkey (via Iran) has significantly increased. The Turkish government has intensified the security near the Turkish-Iranian border as hundreds of people from Afghanistan, Iran, and Pakistan attempt to cross illegally every day.

During the first week of August, Emin Özmen documented the situation near the city of Van, which lies close to a section of the Iran-Turkey border that has become a regular crossing point for Afghan refugees seeking new lives in the west. 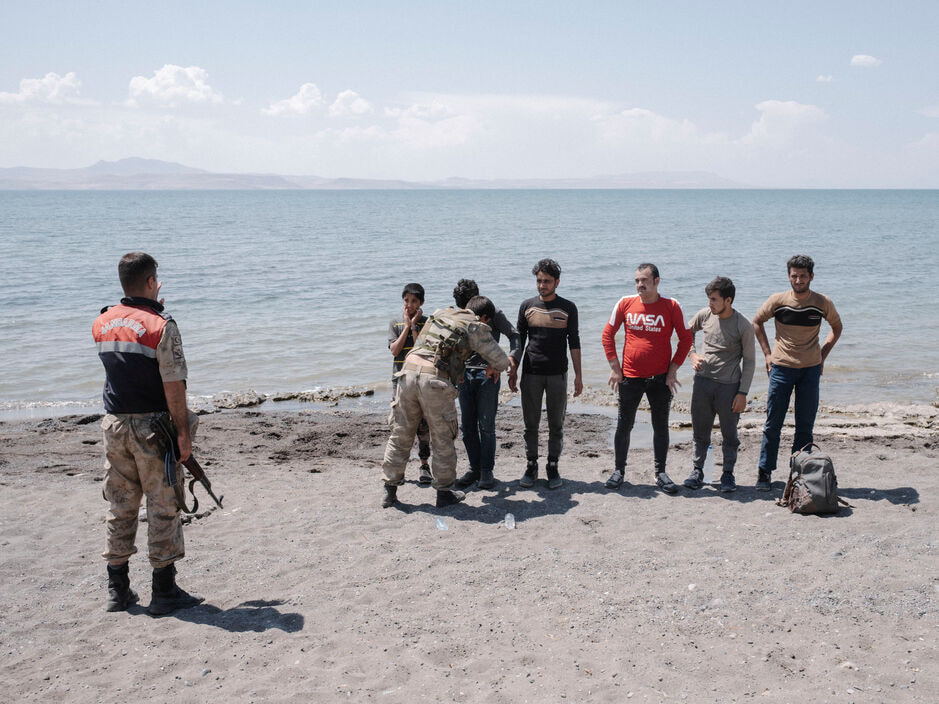 After illegally crossing the Turkish-Iranian border, Afghan migrants were detained by Turkish gendarmerie near Lake Van, Van, Turkey, 2021. © Emin Özmen / Magnum Photos
Truth in Photography: What are the ethics of photographing conflict?

Emin Özmen: For me, it goes together with the ethics of being human. If you are in line with the principles and moral values that you believe in, and that you think are right, then I think you can photograph war in an “ethical” way. There are no different standards when it comes to documenting conflict or another project. Empathy and respect are the most important things to me, whether it's photographing conflict or anything else. I always keep in mind that a photograph should not be more important than your human values. But you find yourself in extreme situations when documenting a conflict and it is sometimes difficult to find your way in the heat of the action, you have to trust your instincts which sometimes pushes you to give up taking a picture. Sometimes I ask myself, if I were the subject of a picture, how I would react... But I then tell myself that I would like the world to know what is going on. It is not always easy morally and ethically speaking, to be always at peace with yourself when you do this job. You should at least be aware of it and try to do your best. 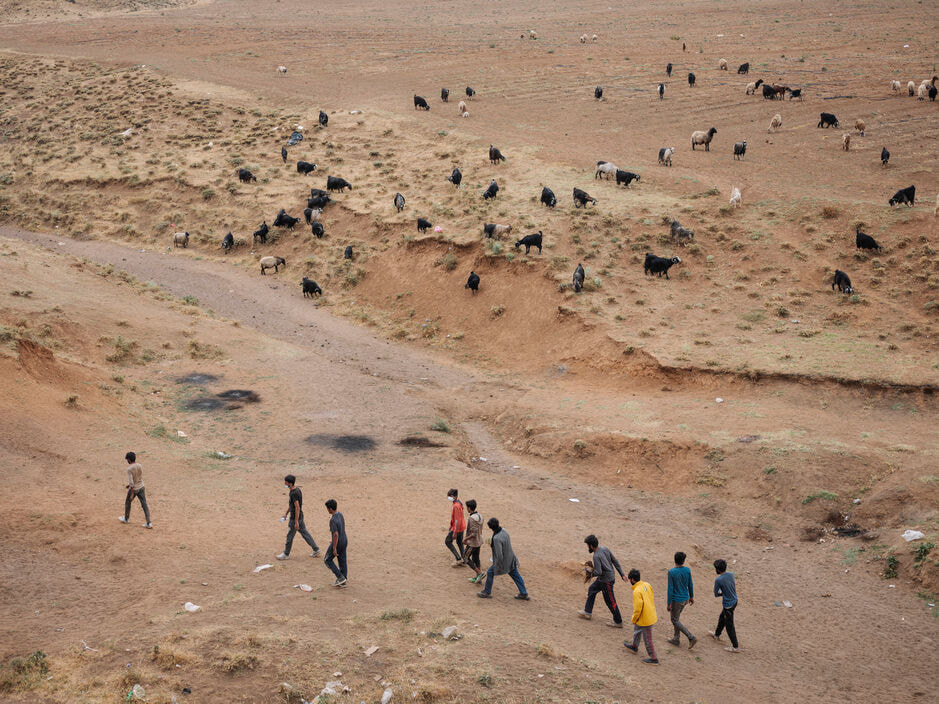 Migrants walk near a flock after illegally crossing the Turkish-Iranian border. Tatvan, Turkey, 2021. © Emin Özmen / Magnum Photos
TiP: In what ways do you strive to present the truth of conflict? Composition? Framing?

Özmen: Making a good photo is not my goal. If you focus on that, you risk crossing some boundaries, hurting people. When I'm working on a story, it's usually about complex issues and situations, with many subtleties. So I spend a lot of time and energy, first of all, to understand and to listen. I take few pictures. When I do, I try to transcribe the emotions of the place and the people as accurately as possible. I am also aware of the responsibility I have, especially from a historical point of view, so I want to be honest with myself and with the people I meet. 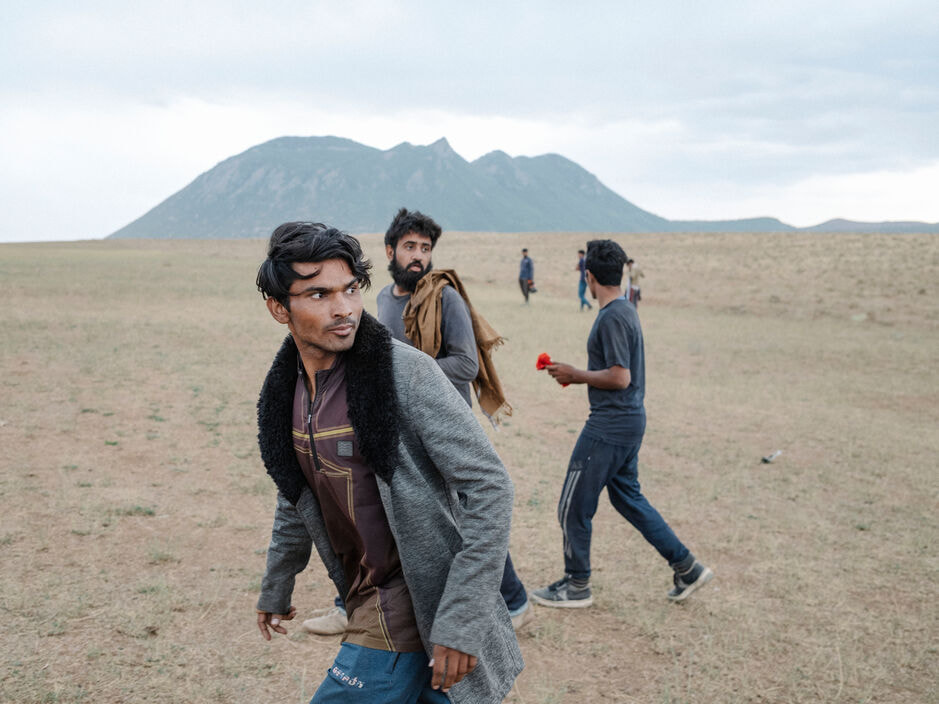 After having spotted a Turkish gendarmerie car with all lights on and sirens wailing driving towards them, migrants run away to avoid being caught. Tatvan, Turkey, 2021.
© Emin Özmen / Magnum Photos
TiP: What is your intent? Purpose? What do you hope viewers will learn from your photography?

Özmen: We quickly forget things, especially when you live in a country where so many events happen on a daily basis, as is the case in Turkey, where I live. I have been documenting my country for many years now and I stopped naively thinking that I could change things with my photographs (even though I still have hope). But after thinking that what I was doing was in vain, I now think on the contrary that my pictures will be evidence of what happened and is happening. This is fundamental and it helps me to go on. People will choose to look at the pictures or not but at least they exist. There is nothing worse than denying the suffering of people, and the photos have a fundamental importance to (re-)establish a certain truth of the facts. On a more personal note, I hope that my photos and words can help people to access information that is sometimes difficult to find, especially in my country. If my photos can bring emotions, make people react, make them question themselves or learn something, then my goal as a photographer is fulfilled. 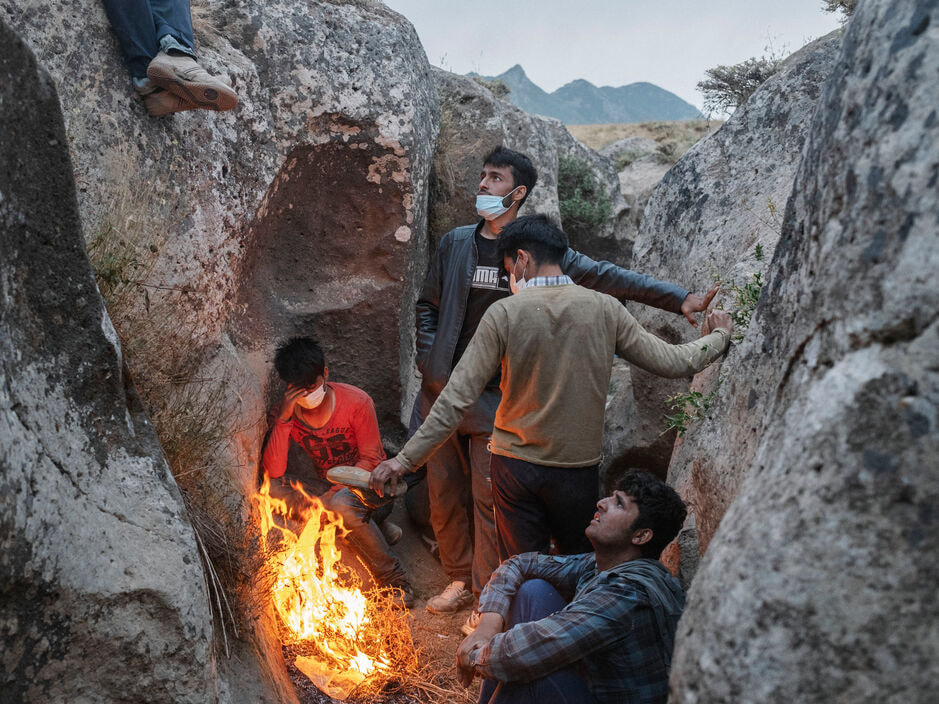 Migrants hide near rocks after fleeing to avoid being caught by the Turkish gendarmerie. Tatvan, Turkey, 2021. © Emin Ozmen / Magnum Photos 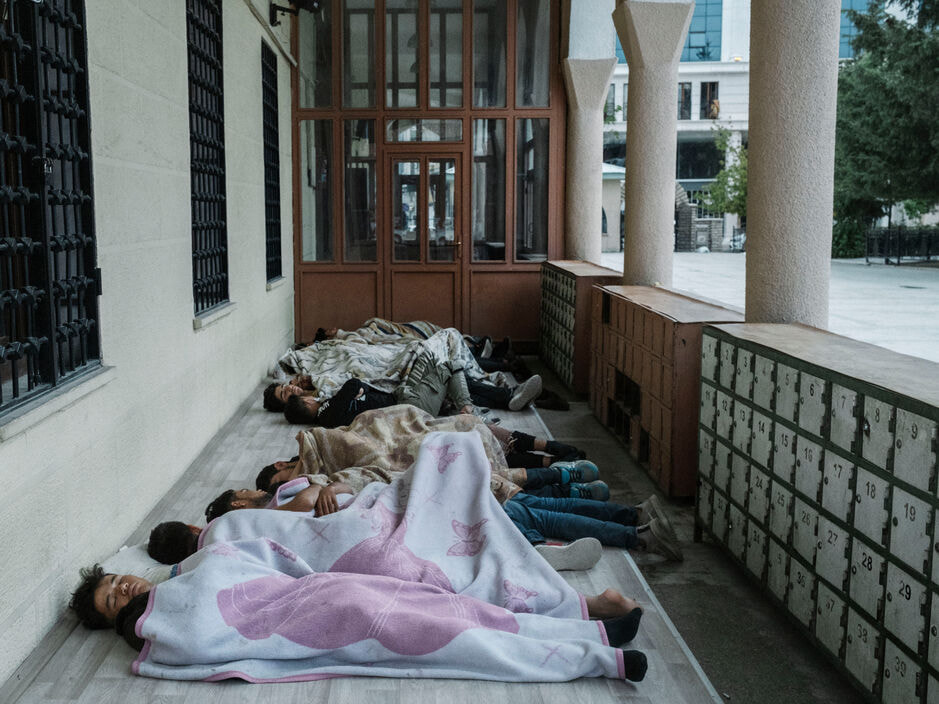 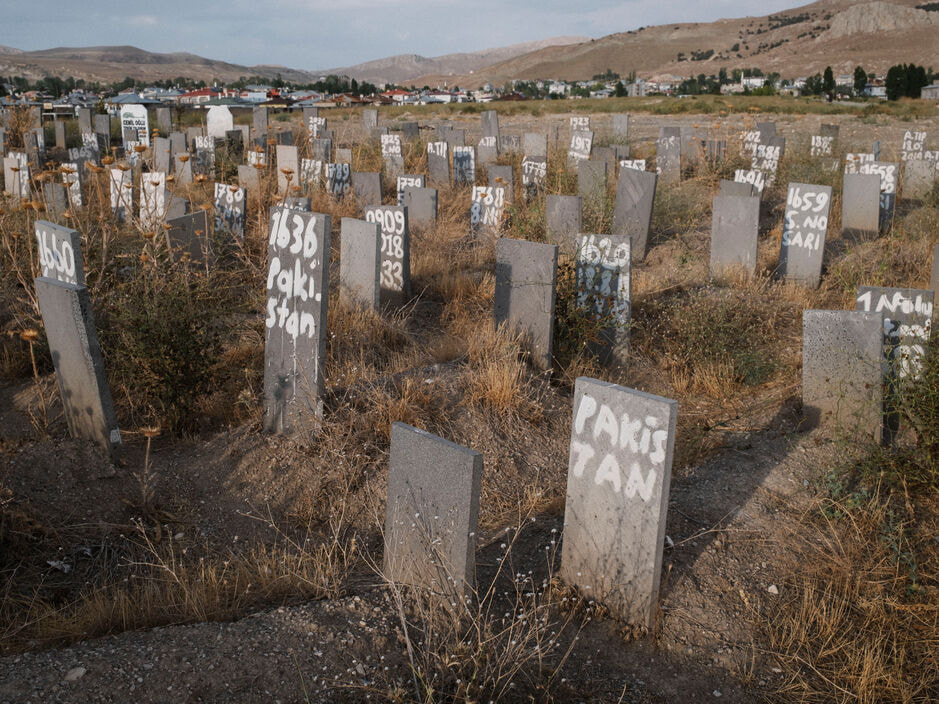 A view of a cemetery in Van where anonymous migrants who lost their lives trying to cross the dangerous border with Iran are buried. A number painted on a simple gravestone and their origin is all that remains of them. There are hundreds of them. Van, Turkey, 2021. © Emin Ozmen / Magnum Photos
RETURN