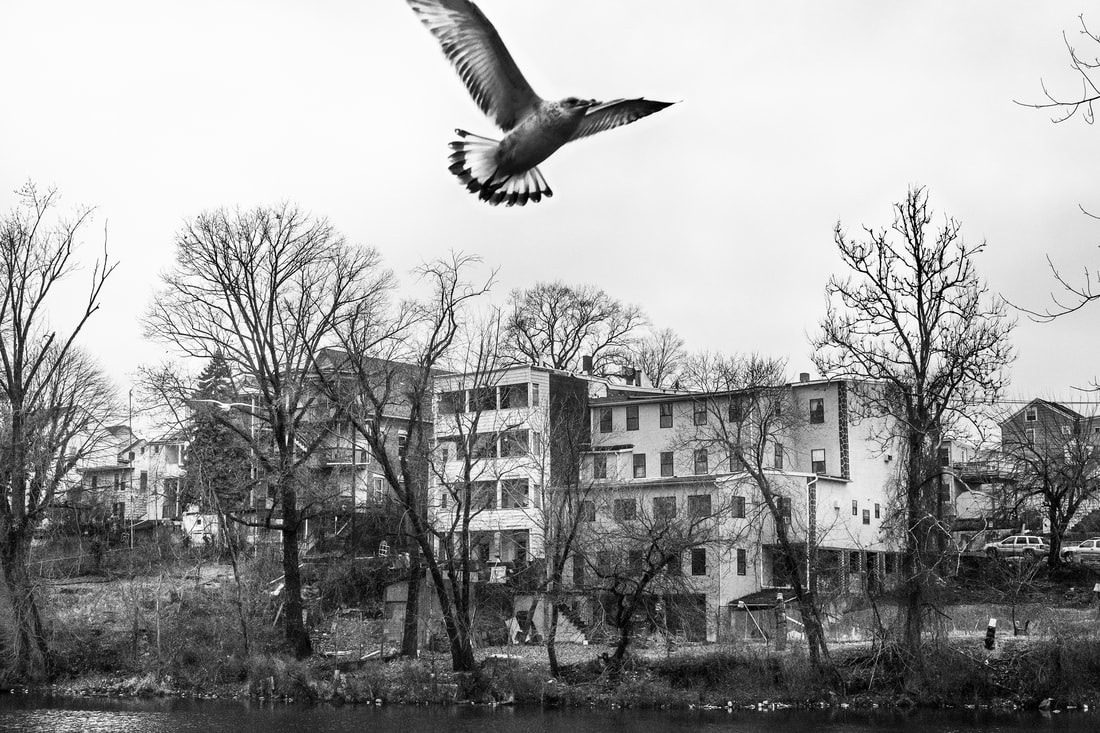 The Passaic River runs behind Libby’s Diner, a Paterson lunch institution. The river plunges over the Great Falls. William Carlos Williams thought of the falls as the beating heart of the city and relied on its geography to lay out his poems. I wandered the banks of the river, photographing what I found along the way. 2016-2017. © Todd R. Darling
Born and raised in New Jersey, I photographed Paterson because it was a prototype for industrial cities and represented the mythology of America. It was an American Idyll; unsustainable. Paterson, New Jersey (est. 1791), America’s Silk City, lies hugging the Passaic Falls. The Falls, powering the cities silk looms through the 19th and early 20th centuries still run vigorous, pumping life into the old heart of the city as the looms lay still. The roofs of the mills creek and crumble, slumping under the weight of snow, their old limbs withering from age and disuse; proud people once filled with the promise of a new hope now dispossessed seek refuge in the old factories.
“You can see the ghosts, sometimes they’re happy but sometimes they’re sad,” says Colleen on a winter’s morning. She sleeps in the cold, sheltered by jagged timber from the persistent snow sinking through the roof of the old textile mill. “What happened?”, asked another resident of the mill. Answering that question become a central theme of my project. Industry builds communities as its draws in local resources to fuel its growth and then inevitably discovers ways to increase profits by moving elsewhere or maybe becomes obsolete. Once gone, the city that relied on its manufacturing base is left without means to maintain its infrastructure or continue to offer opportunity to its people. Decay sets in and Paterson like many communities in America are left to fend for themselves and often struggle against corrupt political elites. Opportunity is born out of who we are or where we are when we enter this world. The notion that we can be anything we want as long as we work hard enough is no longer the rule but the exception to it in America.
An idyll is an idealized period of time that is typically unsustainable and in literature often ends in tragedy. I selected the title American Idyll for my work because the industrialization of Paterson in the nineteenth century and twentieth century was meant to be the American dream come true. Perhaps it was for a time,  but it didn’t last. In Paterson it gave way to a new era of post-industrialization that has trapped the community with declining prospects. The American dream is increasingly out of reach for many. The industrial revolution is romanticized in Paterson and America as an epic story of progress but we often disregard the consequences that many communities have suffered in a post-industrial landscape.

A couple walks along Broadway, downtown. 2016-2017. © Todd R. Darling
My approach to the project was inspired by local poets William Carlos Williams and Allen Ginsberg. I wandered the city streets, back alleys, riverbanks, and old mills stumbling on to house fires, political rallies, and neighborhood celebrations. I wanted to make an allegory about America, delivered through the city of Paterson and her people. The pictures are intended to be lyrical and metaphoric, arranged like a poem about a day in the life of the city. “A man himself is a city,” wrote William Carlos Williams and like Williams I treated Paterson like a man; living, breathing, loving but also dying.
Paterson is the second most densely populated city in America after New York. 150,000 people are packed into eight square miles. It’s home to fifty ethnic groups. There’s about twenty-five million people in America, living in small cities like Paterson. Founded in 1792 by Alexander Hamilton as a corporation, Paterson was ruled by corrupt industrialists who paid no taxes and crippled the city's development. The consequences of its corrupted origins ripple through it today. In black and white, American Idyll depicts a broken city that mirrors American society.
RETURN