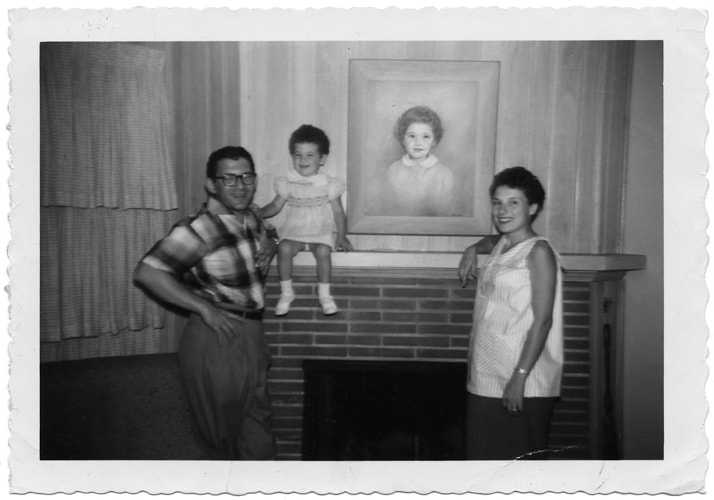 Courtesy Lorie Novak
My favorite photograph from my childhood is one where I am about two and half years old and sitting on the mantle above the fireplace in our living room in suburban Los Angeles, California. In between my mother (who is pregnant with my sister Karen) and me is “the portrait.” This framed painting is of me, the first-born child, the first-born grandchild. I am displayed on the mantle dressed to match the painting. My father's Uncle had this portrait painted from a photograph that my parents had sent him. The story goes that in the original snapshot sent to my uncle, I was wearing Mickey Mouse ears and a Mickey Mouse T-shirt, my favorite attire at that age. The painter took the artistic liberty, probably on my Uncle's instructions, of dressing me in a pink dress with puffy sleeves. Mickey had been replaced by the #1 symbol of the American feminine little girl. To show my uncle how much I looked like the portrait, my parents dressed me up to match the painting so that it would be a more accurate representation. It is a sign of the times that of course I had a dress very similar to one in the painting. And so, I looked like the painting that was painted from the photograph, and this photograph proved it: Truth and family photographs. 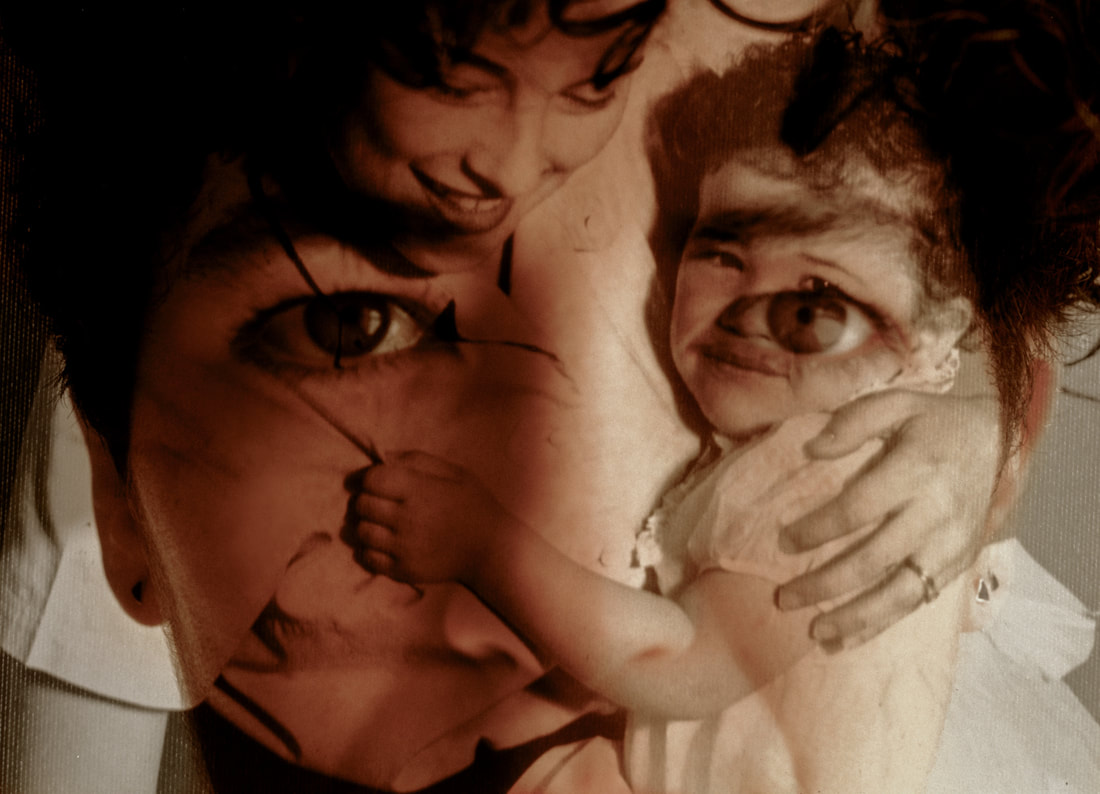 Clutching, 1990. © Lorie Novak
​From the mid-1980s through most of the 1990s I made photographs of projections of family photographs into empty rooms and onto trees with images drawn from my family’s archive. I searched through boxes and drawers for snapshots that hinted at the true complexity of our lives. I was repelled by the abundance of stereotypical feminine poses. I looked for images that broke away from photographic conventions and stereotypes and revealed some of my struggles growing up. My parents were children of immigrants, white, Jewish, attractive, well educated. So many of my family’s photographs play out the so called “American Dream.” How could I puncture this?
​Wanting to see my family’s photographs juxtaposed with what was going on in the world and historical trauma, I created photographs and several projected sound and image installations that layered my family’s documented history with public images: the Holocaust, the fight for civil rights, protests, assassinations, the Vietnam War, and more. I was interested (and still am) in how we come to know the world and ourselves through photographs, the tension between the personal and the public, what was and was not photographed, and how we can use archives to reframe the past and suggest new narratives. 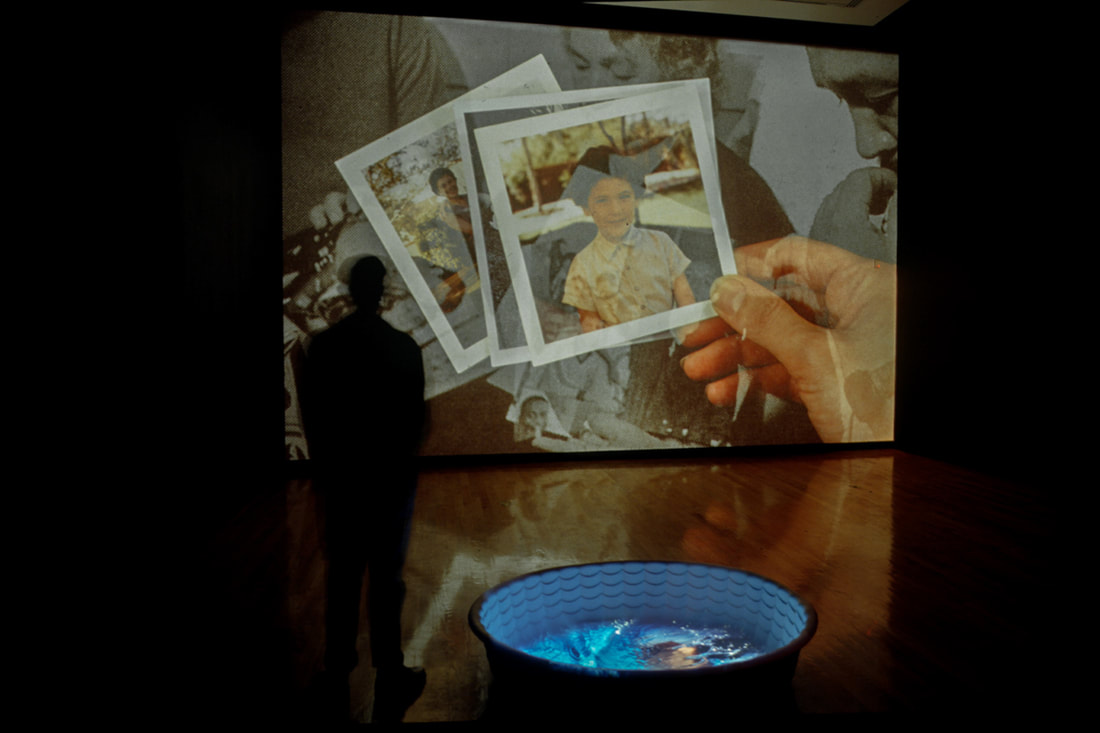 Playback, slide/sound installation, 1992. © Lorie Novak
In thinking about more ways to penetrate the isolated world of my family’s snapshots, I started collecting photographs from others, and my multi-faceted Collected Visions project was born in 1993. When given the opportunity in 1995 at the now defunct Center for Advanced Technology at NYU to create a project, I jumped at the chance to use the interactivity of the new artistic space of the “World Wide Web” to explore how family photographs shape our memories from many different viewpoints.  In 1995, the Internet as an artistic space was in its infancy and Netscape 1.0 had just appeared.  collectedvisions.net launched in 1996 and was created in collaboration with Clilly Castiglia, Betsy Kershaw, and Kerry O’Neill.  A mantle with framed photographs is the navigational base, and from there, visitors can search a database of approximately 3,000 images collected from hundreds of people. Search parameters include who is in the photo, what categories do you want to see, and what time period. I determined categories by looking at the images for common themes. 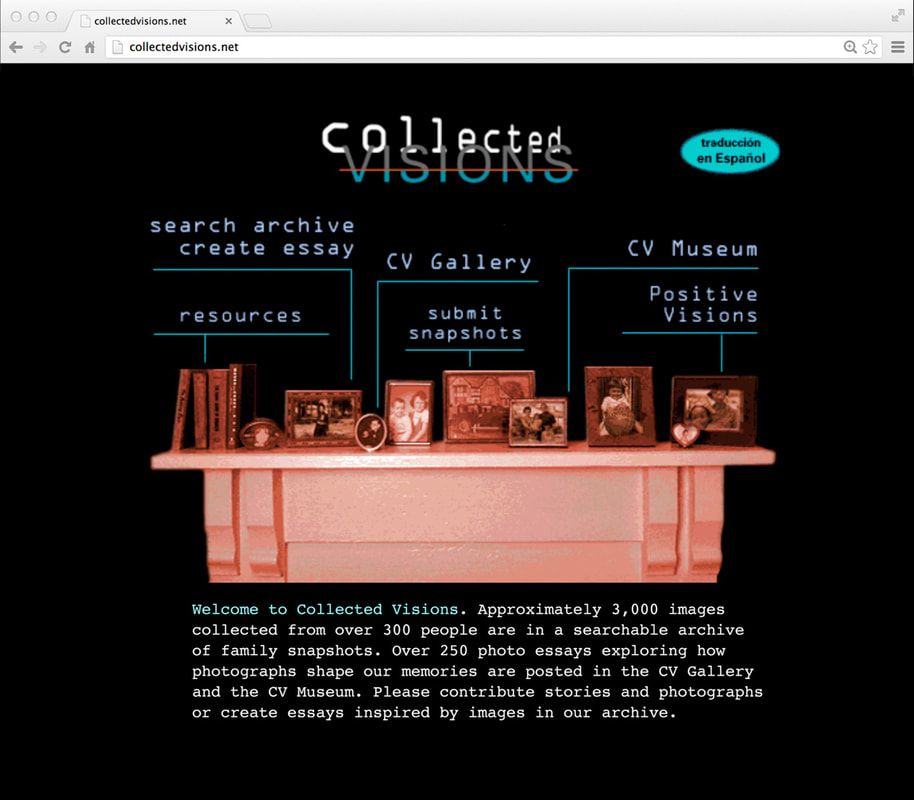 Tools are provided so that visitors to the site can write, design, and submit photo essays for exhibition in a Collected Visions Gallery. The essays are archived in the Collected Visions Museum.  After completing an image search, visitors choose images to write a story about. The majority of the people submitting stories have written about photographs that are not their own.  Some authors claim them as their own, while others confess that the photo could have been theirs but is not. “This is a photo of me and my younger sister. No, not really. But if it were, I'd be the pediatrician, like our father, and she'd be the patient my dad would have to leave dinner to visit at the hospital.” (Excerpt from the essay Will She Get Better?) “This is me and my sister Alex, last Thanksgiving. She is always after me to make something of my life, she doesn't respect the choices I've made.” (Excerpt from the essay I Hate the Holidays.) 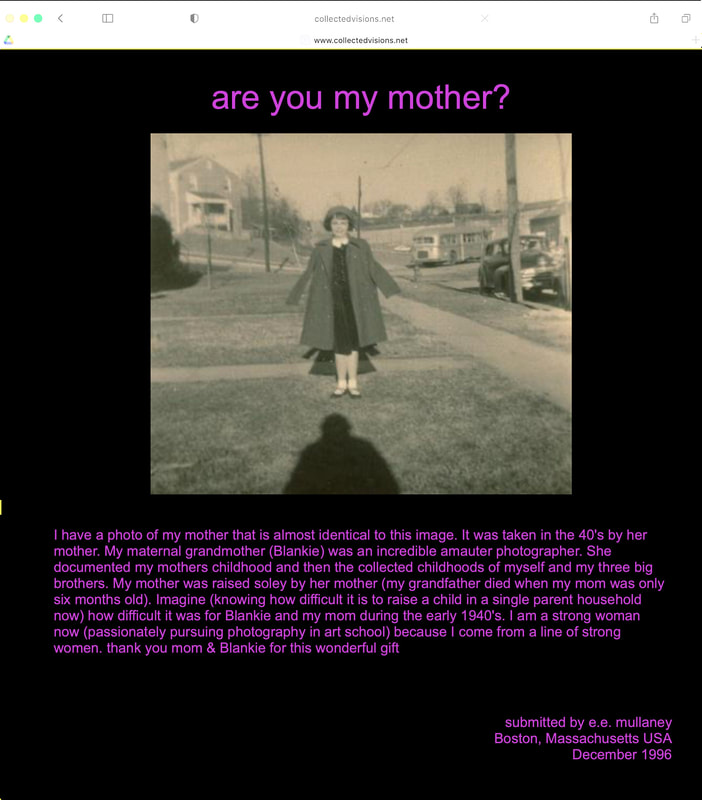 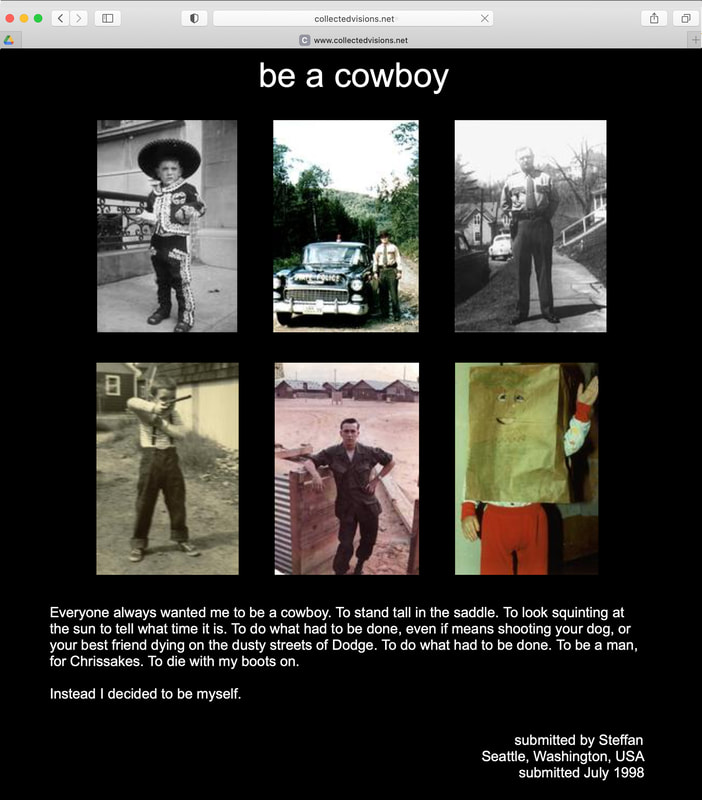 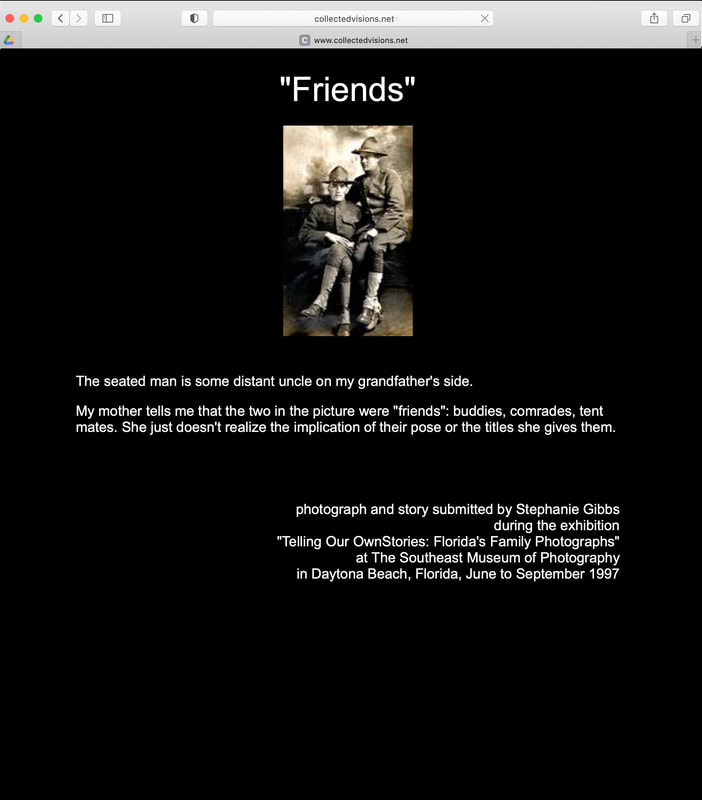 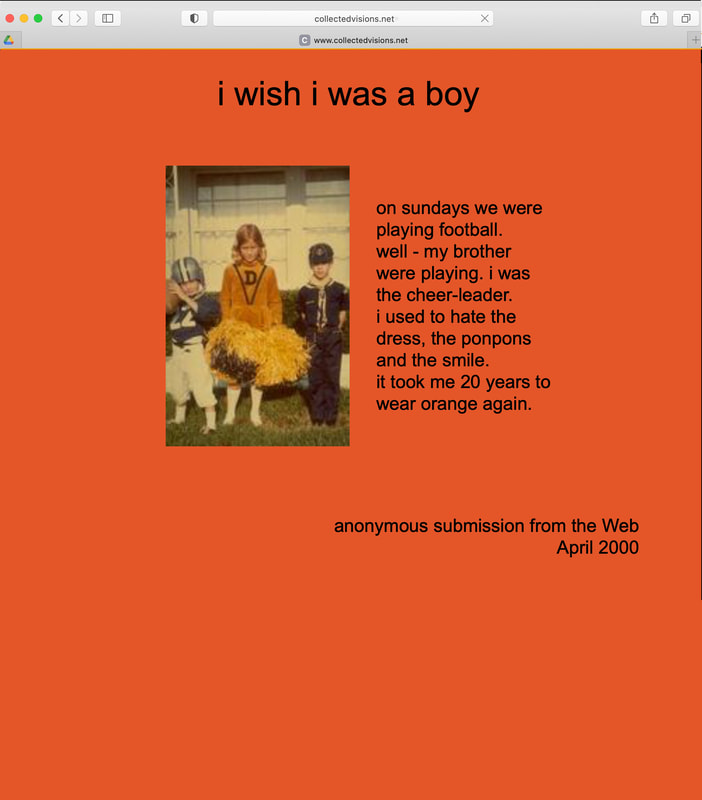 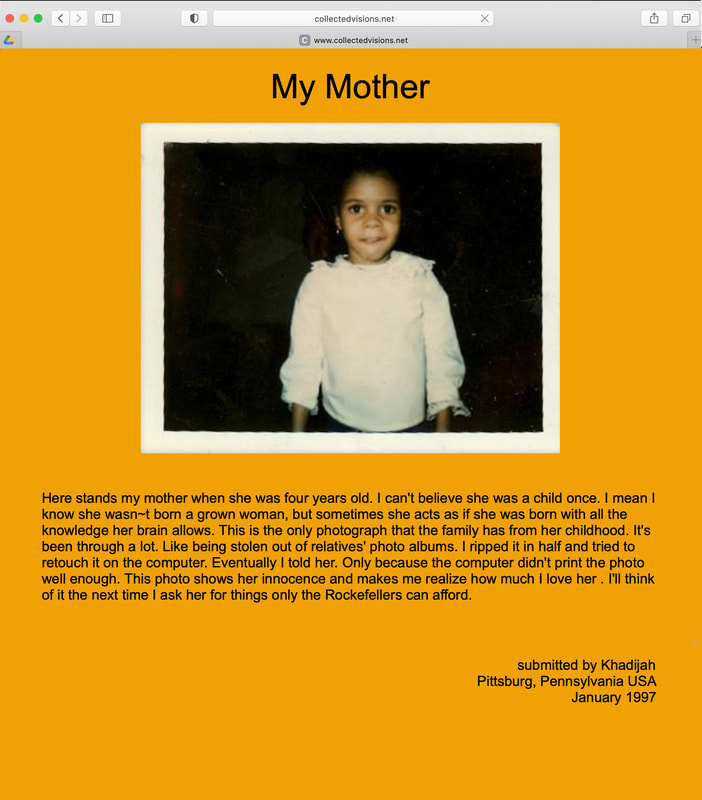 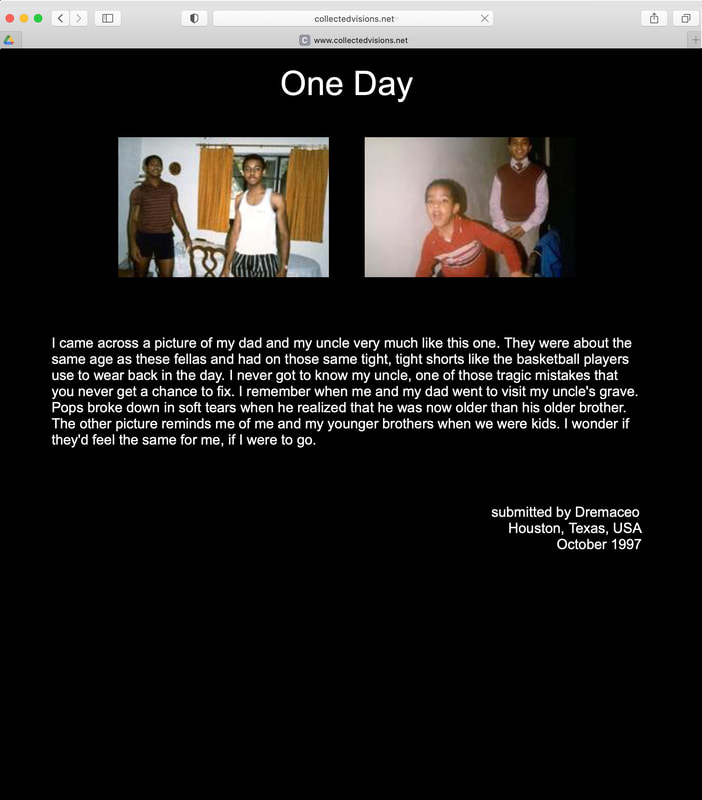 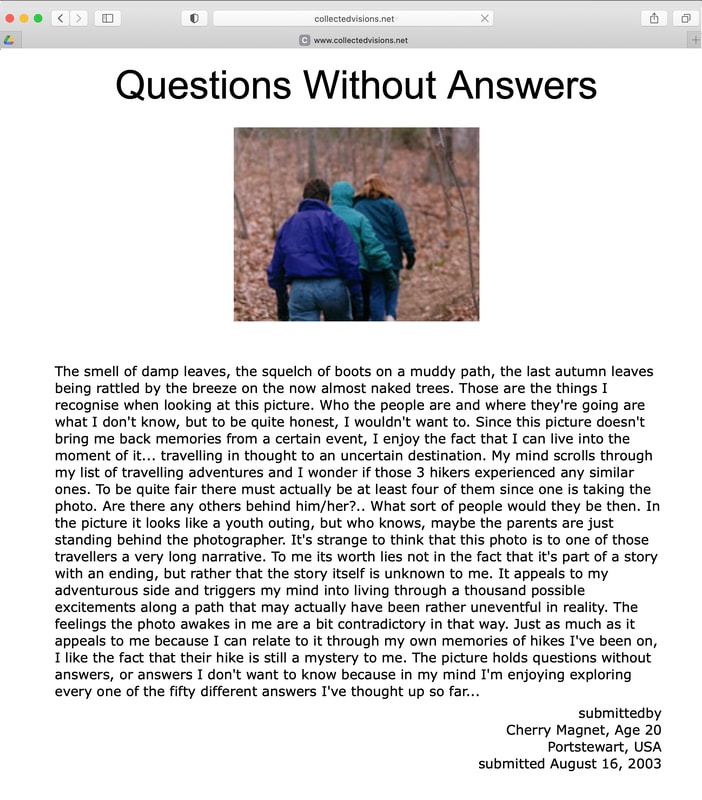 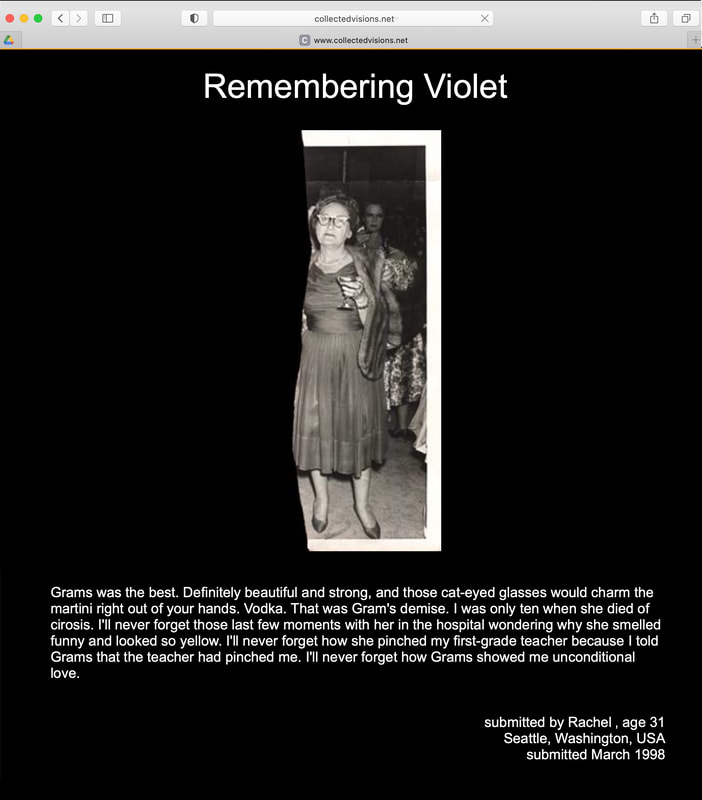 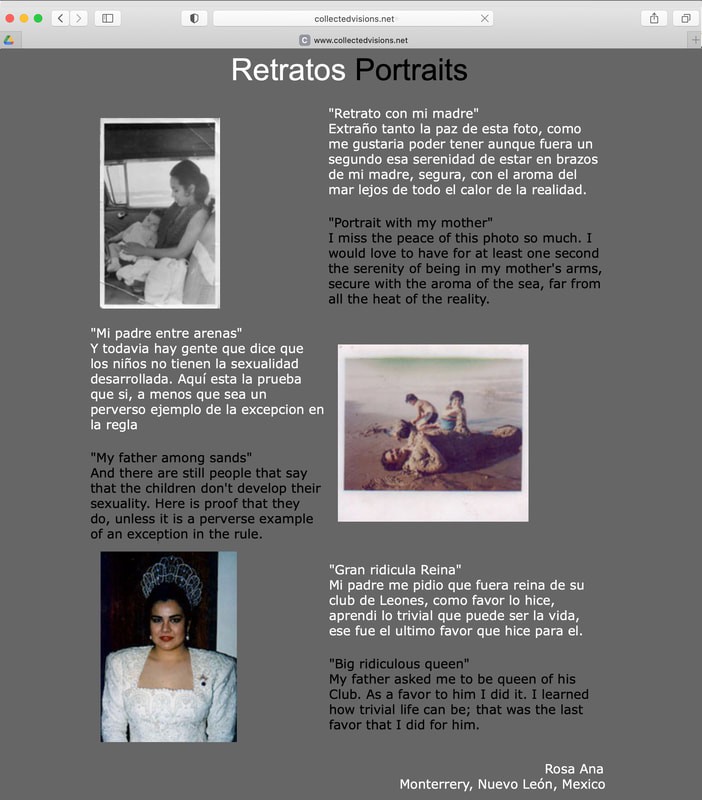 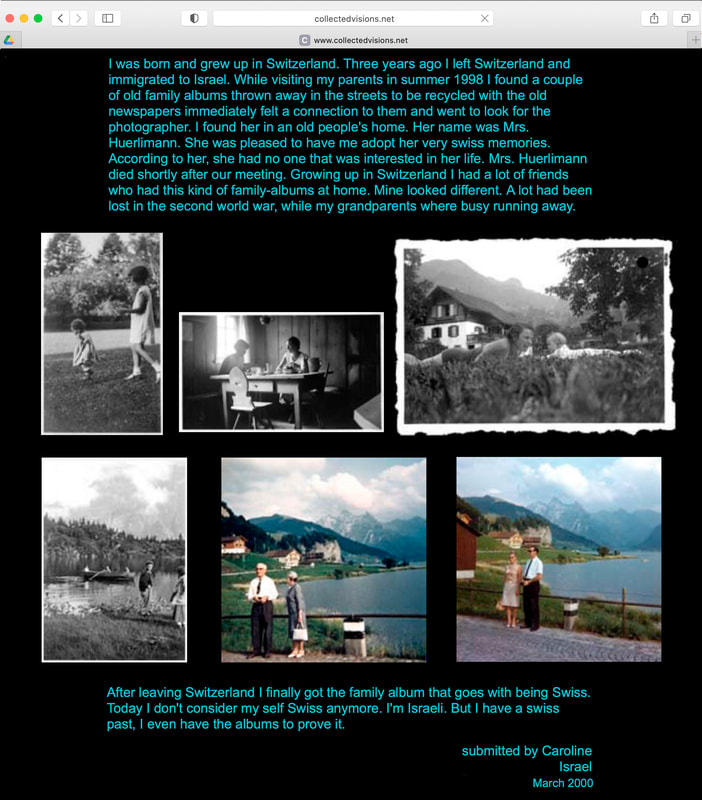 The interactive component of Collected Visions was in part inspired by the many conversations that I had when I traveled with my exhibitions or gave lectures. People talked to me about their family photographs—how they were and were not like mine. Many times, someone would go into great detail about snapshots they could no longer find and often questioned if these photographs ever really existed. Photographs can seem to help us remember and also fail to reflect our past as we remember it, and this dissonance is very interesting to me. 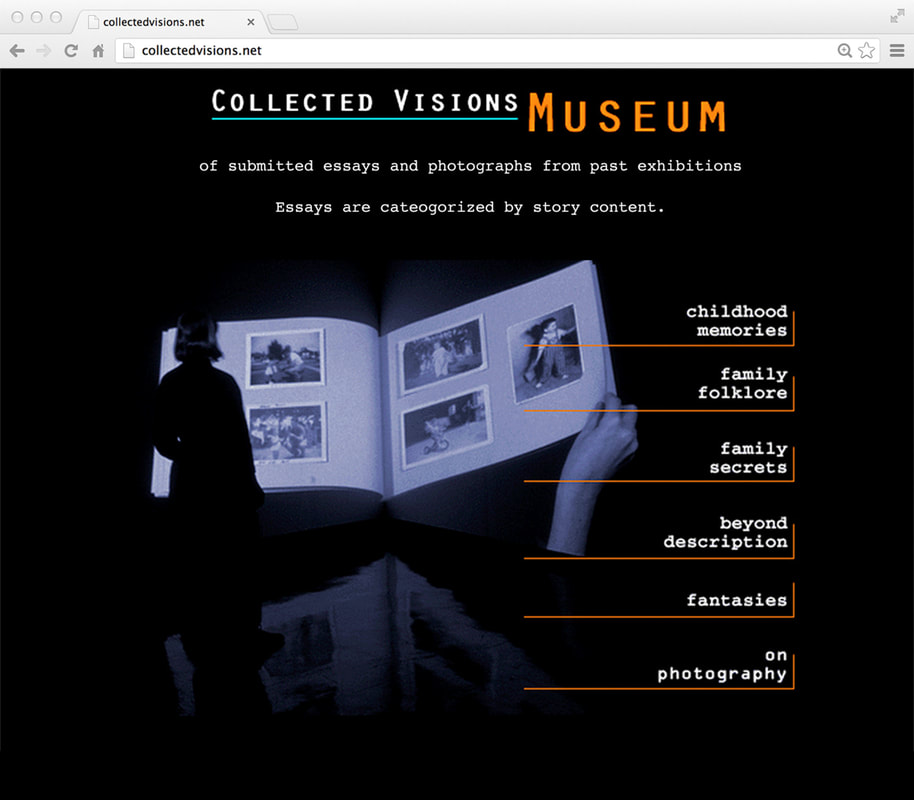 My interest in family photographs has always centered around the fact that their relationship to truth is slippery.  With so many similar photographic conventions, it is often the narratives surrounding our images that are most revealing. Marianne Hirsch, with whom I have been discussing how family photographs function for over 25 years, writes, “As photography immobilizes the flow of family life into a series of snapshots, it perpetuates familial myths while seeming merely to record actual moments in family history.” We so often see what we want to see. What is the real story? What has not been photographed? We cannot help but understand an image based on our own experience. The majority of the people who submitted stories to Collected Visions wrote about photographs that were not their own. For me, this identification speaks to our desire to find clues to our pasts in photographs. One’s own family’s archive may not be that revealing—even authors who contributed images of their own usually chose to relate a personal story connected to anonymous images. In order to emphasize ideas of multiple and evolving truths, I do not reveal who the photographs belong to.
Screen recording of a visit to collectedvisions.net
In addition to the website, I created a computer-driven projected installation with music by Elizabeth Brown in 2000. The installation contains 200 dissolving images drawn from the Collected Visions archive. Elizabeth’s music incorporated snippets of interviews with people talking about their images:  “I wish I had some photograph that I felt…I could remember, not just the circumstances, but how I was thinking and feeling.” Truth is elusive, joy and sadness co-exist, and questions go unanswered. As another interviewee said: “…even some of the miserable experiences we’ve had together, like some family holidays, we still enjoy the photographs.” 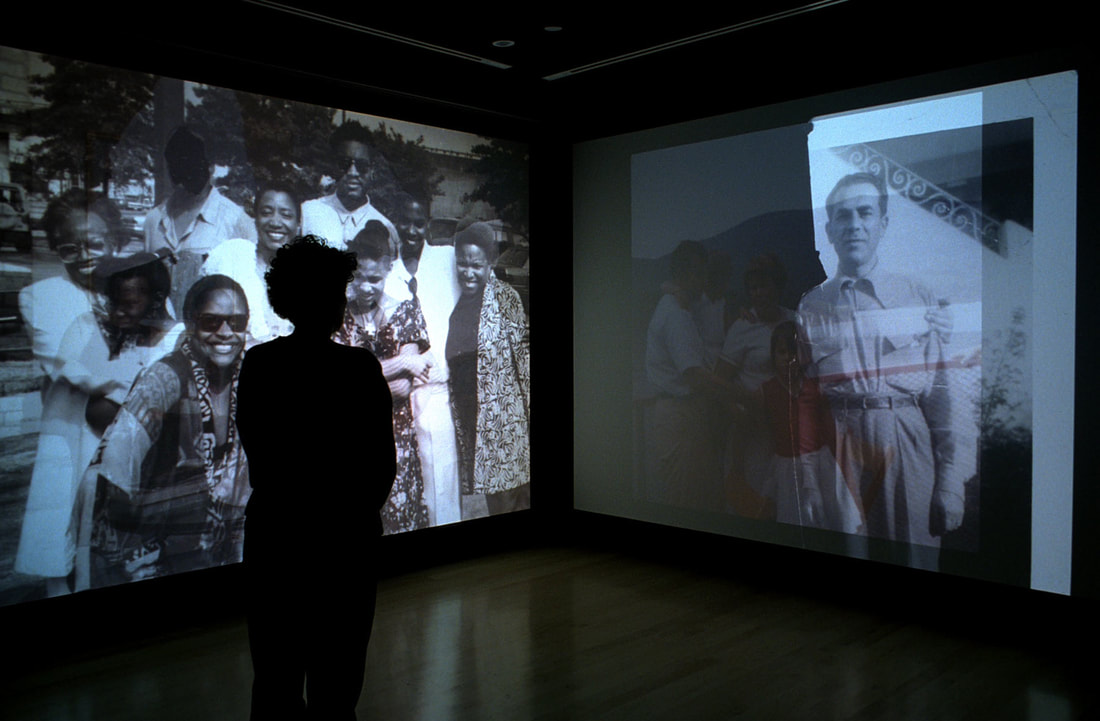 Collected Visions, computer-based installation, 2000. © Lorie Novak
​Excerpt from Collected Visions Installation with music by Elizabeth Brown. The entire documentation video can be viewed here
​The Collected Visions website’s most dynamic years were 1996-2006.  The vast majority of photographs in the database were analog images that were then scanned. Interestingly, my engagement with the site slowed down in 2006, the year that Kodak’s digital sales overtook film ones. The site remains searchable, but I do not collect images or stories anymore. I am thrilled to have the opportunity to revisit collectedvisions.net on the 25th anniversary of its launch for this edition of Truth in Photography. Although it was one of the earliest participatory storytelling sites on the web, a precursor to Web 2.0 social networking, and foreshadowed the shift in how we share photographs of our private lives, Collected Visions has been largely ignored in new media history because of its content. It was about family life, photographs, memory, and storytelling, not technology.

Identities, 1998. © Lorie Novak
​What do family photographs mean in 2021?  The performative force of photographs of our daily lives has changed as we share and view selfies and photographs of friends and families in abundance online every day. Our cameras in our phones are always with us enhancing the present. We keep retaking photos until we get the images of our lives that we desire. With the incessant documentation of our lives, how we will interpret our pasts in the future? How many digital photographs get lost as we switch phones, run out of storage space and software becomes obsolete? We are not making the same conscious decisions as to what photographs to save. There are no idiosyncratic arrangements in photo albums. In the years to come, can scrolling through hundreds of images on a computer compare to finding a photo album where the photos have been selected and sequenced or a long-forgotten box of old snapshots that are torn at the edges, worn with age, and have some notes scribbled on the back? We have moved from Kodak professing, “Snapshots help your heart remember” to Facebook and Instagram shaping our memories by creating moments of nostalgia with their algorithms. Our camera phones are always with us, however, and we are photographing more of the everyday, while gatherings of family and friends are photographed by multiple people with different viewpoints and shared more often. I can’t help but think back to the mid-1990s when I was asking friends, family, colleagues, and people I met at my exhibitions to loan me their family photographs to scan for a project on the “World Wide Web.” More often than not, I was asked, why would anyone want to look at my family photographs on their computer?

Family photos play a very public role during times of loss. Photographs become a tangible connection to those we have loved and lost. Images of family members holding photographs of the missing or dead are a recurring strategy in media reporting. In the aftermath of 9/11, the “missing” posters of loved ones throughout New York City were transformed into memorials with inscriptions from family members and with new photographs and messages added on a continual basis. With no graves, the photographs acted as portals through which loved ones spoke to the dead. Family photographs are used in protests and memorials to honor those murdered as a result of police and gun violence. During this time of the COVID-19 pandemic, family photographs shared on social media and intimate stories by documentary photographers have helped us understand the impact of the isolation and loss. The printed snapshot being held by loved ones appearing on front pages of newspapers, in TV interviews, in makeshift memorials, and in family altars continue to help us grieve and act as powerful memorials. 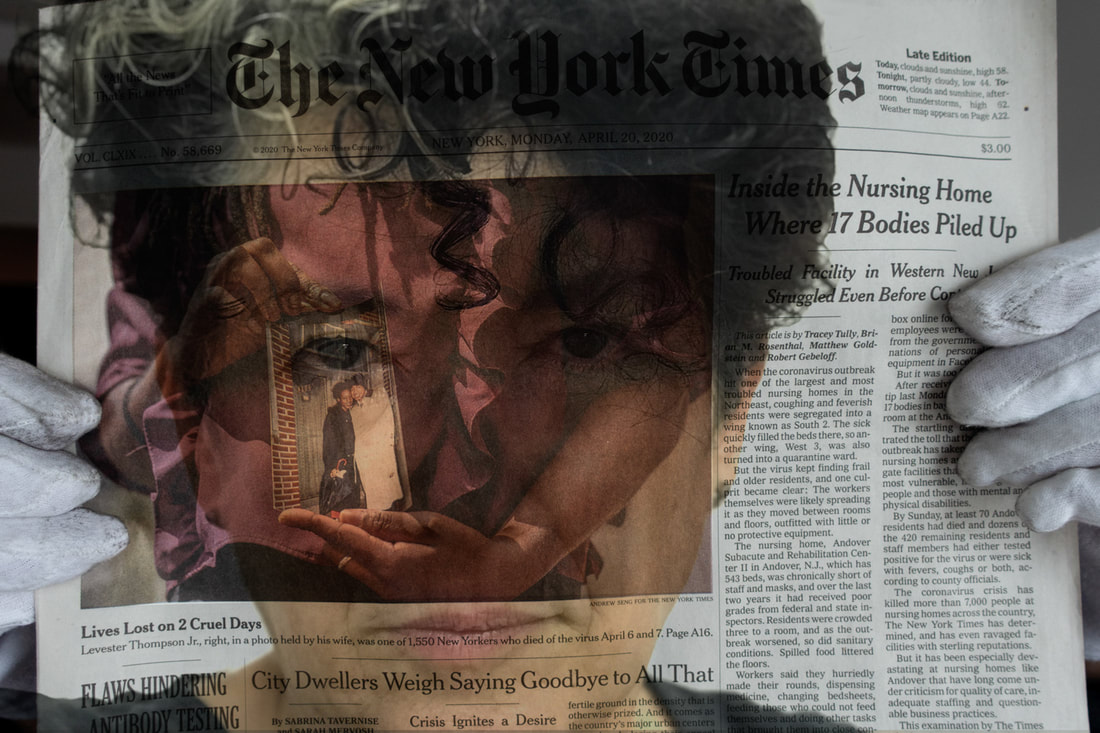