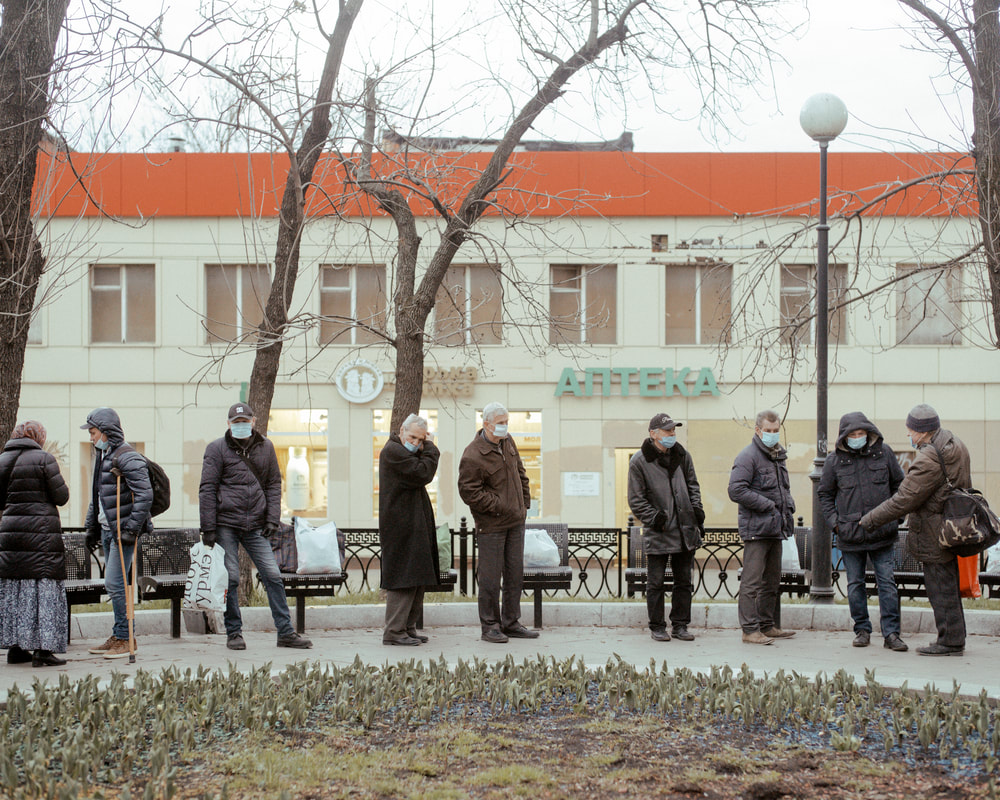 Govenar: What started you doing your work on Covid-19? 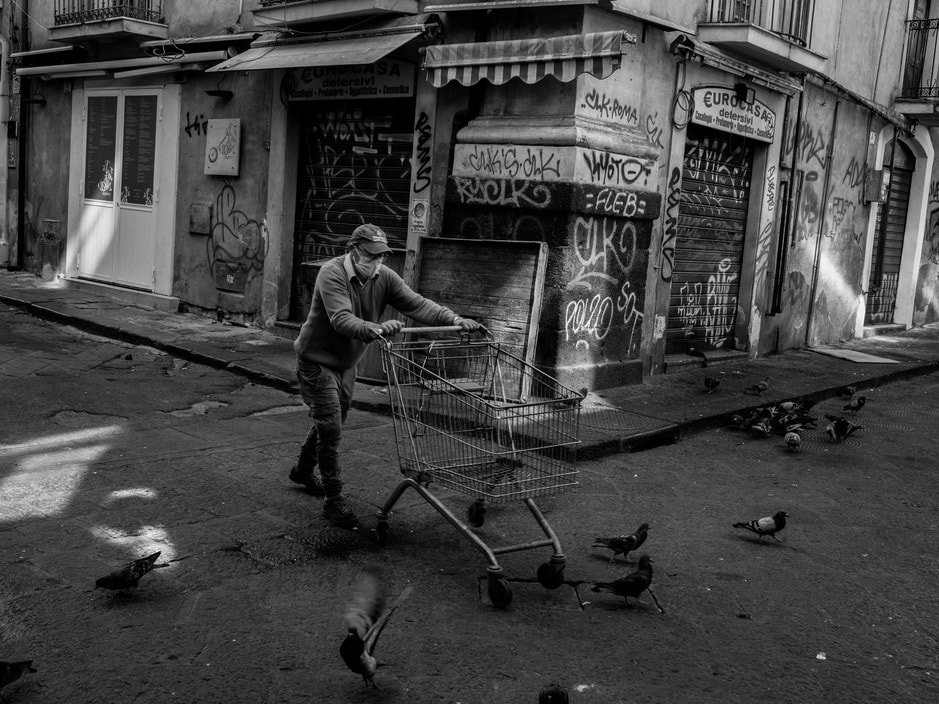 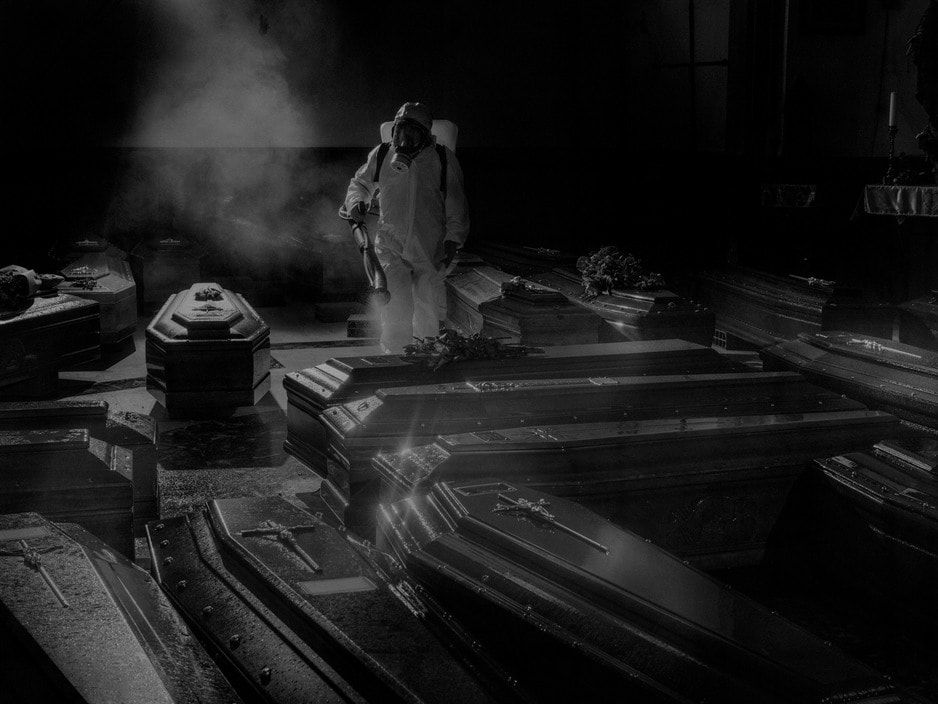 Photographs by Alex Majoli. ​© Alex Majoli / Magnum Photos
​Govenar: So during what period did you make those photographs?

Heitmann: I started to photograph in April [2020]. The first time I was in the hospital itself was the end of April, but before that I was photographing the Easter ceremonies of the Orthodox Church. What fascinated me also in the pandemic was making so many pictures I thought I’d seen before in the 1918 flu. I saw pictures of crowded people standing in front of a church in New York, I think. So many motifs I’ve seen one hundred years ago, and now they’re coming back. The Orthodox Church was not acknowledging that there’s this virus, or denying its existence, so the Easter processions would continue.
​Govenar: In those photographs, they have a coloration that is really amazing to me. There’s something about the compositions that remind me of the paintings of Bruegel. Did you think that when you were photographing?

Heitmann: In Russia, the church services didn’t take place, or just illegally, so I drove to a city which is two hours away from Moscow. There, I was going from church to church and asking before the service starts for permission, and most churches didn’t want me to photograph. In the end, I could photograph at this church, and it also ended up being this really old church with candles, and it kind of really reminded me of being in some other time. Except the masks. I decided to take the picture from the corner where there was this construction work and people sitting, because usually in an Orthodox Church service, it starts somewhere in the late evening and lasts until sunrise, until five o’clock in the morning. And usually people are always standing all this time. Only the old and the children, they had some benches in the back. I found this was the most meaningful place.
Govenar: When you’re making these photographs, what’s going on in your mind? Are you just responding spontaneously? Do you have some sense of what you’re trying to do, what you’re trying to say through your photographs?

Heitmann: I think it’s always mixed. Sometimes I try to prepare. And I also like a lot of historic art, and how the Flemish masters worked with light. In this case, it was important for me to show how there’s such a denying of the existence of the virus, and the most vulnerable people are just packed up in this building to stay all the night.

Govenar: That life goes on regardless.

Heitmann: Regardless of everything, people are singing. Nuns were singing like angels. I was there with my partner, and he fell asleep, and at some point he said he had the feeling like there were angels.

Govenar: It’s interesting that you mention Flemish painting because they seem compositionally to be influenced by painting. Did you think about this when you were making them?

Heitmann: Maybe unconsciously. I don’t know. I really like the Flemish art and I look at it a lot. So maybe unconsciously I get reminded.
​Govenar: Photographing people in the hospital raises different kinds of ethical questions. People are suffering, people are working. To what extent do you think about these ethical questions when you’re photographing people?
​Govenar: When you’re talking about this idea of being more gentle, it’s your presence, it’s your body language. So when you’re talking about these photographs in the hospital and trying to give a more gentle view, it’s because that’s what you’re emanating to the subject, and they’re responding to you. Do you believe that to be true?

Heitmann: Yes, yes, for sure. I think I have to say I was also talking to the women sometimes, especially with the hospital. I sometimes get too much into the person, or I mention myself sometimes too much. So sometimes I have the feeling I would like to be more distanced from the person or her pain. Because I think I’m getting emotionally too close, and it’s kind of really affecting me psychologically.
​Heitmann: My mom, she’s a psychotherapist, and my dad, he’s an ergo-therapist. He works with people who had a brain stroke, who are paralyzed, to make their life easier. Sometime before I started studying, I was sometimes following him where he works with his patients. I felt so sad for some patients, and I was asking him how he works with them everyday, and he says, “Feeling sad for them doesn’t help anyone, it kind of destroys yourself and it doesn’t help them.” That’s something I was thinking back on so often, but it’s really hard doing.
RETURN