ESSAY BY SHELBY BARTHELEMY
The opinions expressed in this essay are the author’s own.
​Gilles Peress is a notable French photographer whose work primarily deals with documenting intense political instability and human rights conflicts around the world. In doing so, Peress intends to challenge the indifference and deliberate inaction of the Western world. Peress seeks to maintain objectivity while also producing images that will evoke a reaction — Testing the bounds of human nature and our capacity to express empathy. 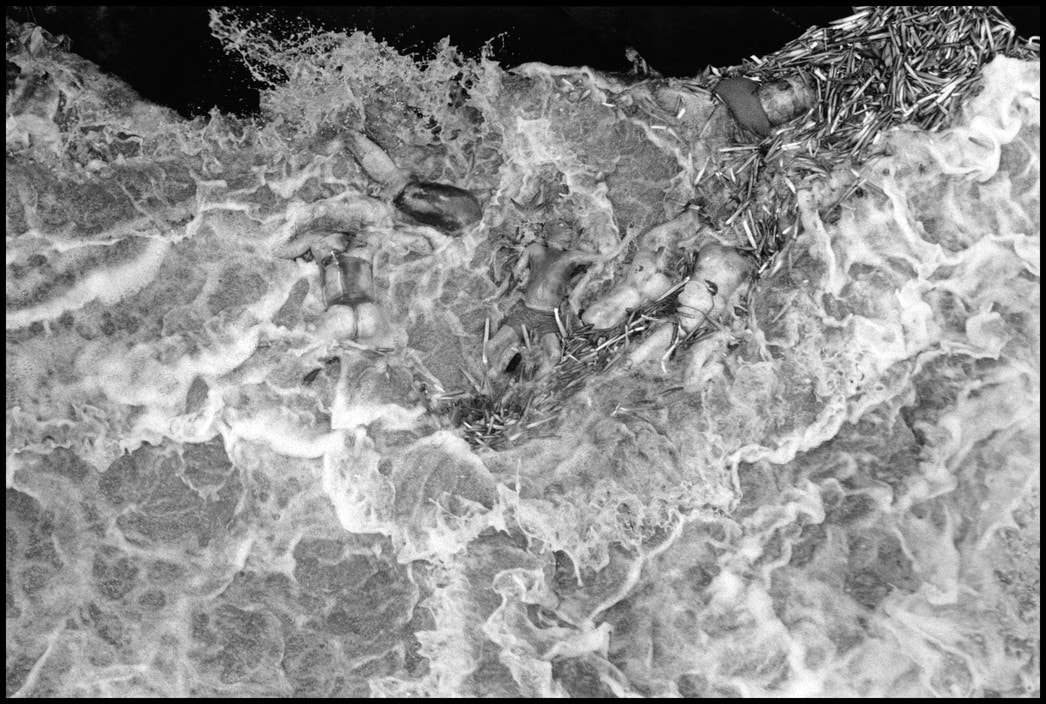 At the base of Rosumo falls, some of the hundreds of thousands of victims of Rwanda's tribal violence wash up in the Akagera River. Rwanda, 1994. © Gilles Peress / Magnum Photos
This photograph is part of a series of images taken by Gilles Peress of the aftermath of the Rwandan Genocide. Bodies of the victims can be seen washed up on the shore of the Akagera River. This challenging photograph highlights the inherent disregard for human life throughout this tragedy. Reminiscent of debris, these bodies have been discarded and left at the mercy of the turbulent waves. A river that was once a source of nourishment now acts as a source of terror. Its waters carry the horror of mass casualties to all bordering countries — Highlighting the impact of the Rwandan Genocide on Rwanda and its neighboring countries. Without being directly impacted, it becomes easier for Western powers such as Europe and the U.S to use geographical restrictions as a means of distancing themselves from “African issues.” However, these images can do what the Akagera River cannot: expose Western countries to the realities of this tragedy.

When seeking to photograph such sensitive and challenging moments in human history, photographers must be aware of and acknowledge their identity in relation to the spaces and scenes they would like to photograph. Given the European nationality of Gilles Peress, it is important to note the significance of his role as a photographer. A European man capturing the scenes of horror within a country whose heightened tensions can be traced back to its colonial-era speaks to the power dynamics of the world. The Rwandan people are not given the authority to dictate the context in which images of their country will be portrayed, and thus must rely on the perspective of someone who is so far removed from their culture. With this in mind, by recognizing these dynamics and the history of the site of conflict, photographers like Gilles Peress can create images that do not glorify violence but rather re-sensitizes viewers to the reality of violence for the lives of so many around the world.

The documentation of human history will and should continue. We have witnessed photography's impact and ability to become a tool for cultivating change on a global scale. While millions of lives have been lost, the images of the cruelty they endured will persevere. These photographs thus become actors in themselves — Existing for the sole purpose of advocating for justice.
RETURN