ESSAY BY KAY BROWN
The opinions expressed in this essay are the author’s own.
Just five minutes and fifty-one seconds into the HBO Original Documentary Film entitled Four Hours at the Capitol, former President Trump is telling his supporters of the plan to remedy a failed democracy. He tells them that after his speech “we’re gonna walk down, and I’ll be there with you, to the Capitol.” Because the only way Trump believed to remedy this was to not exhibit weakness, but by encouraging his supporters to “show strength and to be strong.”

The attempted coup that took place on January 6th, 2021was a battle of brute strength. Traitors under the leadership of​ Trump brought their own weapons ranging from bats, spears, hammers, and at least one identified gun. Yet, they still desperately weaponized and grasped surrounding materials of democracy such as the inaugural scaffolding. However, the insurrectionists also used their body and illusionary patriotism as a source of the spectacle that is domestic terrorism. This type of spectacle is demonstrated in more covert intimate ways. Such as the surging of bodies to break the limited line of capitol police defense. It can be seen in the battle of the January 6th insurrectionists being one of bone-crushing against bone and seeing whose break first. There has always been a sense of expansion and forward surging momentum that has plagued America since 1776. This is why 1776 is the battle cry that the insurrectionists chant to conjure the spirit of their like-minded colonial forefathers. Who too believed that there was more property, property being both land, and people, to claim if only freedom rang. Jack Angeli’s, the QAnon shaman, billowing voice continuously rang freedom while surging the capital. While freedom rang clearly for America’s forefathers and Jack Angeli, it has always been a source of conflict due to hypocrisy in regards to marginalized communities. ​
​An image that was photographed by J. Scott Applewhite on the house floor captures the conflict between surgers and police. While images like Gast and Applewhite’s undoubtedly will go on to become cemented iconic images, van Agtmael has always seen himself “as trying to work around the edges of the iconic, rather than on the iconic itself.” Therefore, while he didn’t make it inside the capital building, he was on the edge of the capital building where he captured an intimate moment of the spectacle of domestic terrorism.

​A single left hand, with a grey ring on the ring finger, clings to the edge of the capitol building. The extension of this person’s body is obstructed by the wall. This leaves only a backward brown hat resting on a head turned downwards; facing thousands of insurrectionists. The leaning right diagonal of the trees on the left side of the image draws our attention to the Washington Monument in the background. The monument is an obelisk erected to honor the man who called for freedom to ring over the colonies, the first president of the United States George Washington. ​ 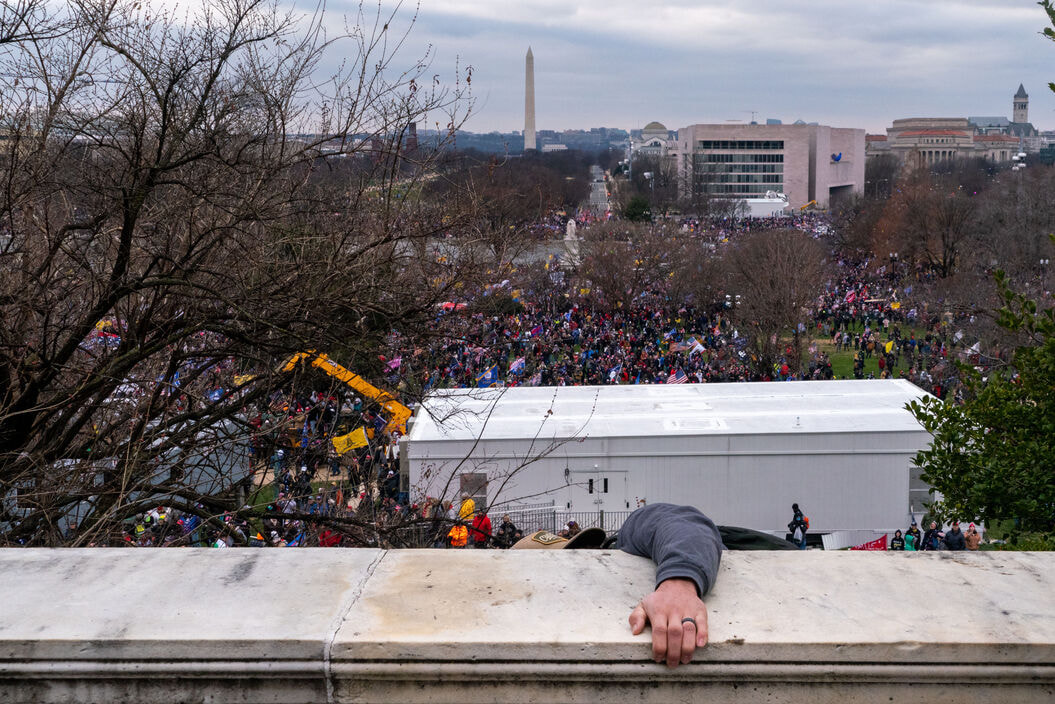 Following an inflammatory speech by President Trump, protestors objecting to the certification of Joe Biden by Congress storm the Capitol. They were briefly blocked by police before gaining entry, and wreaked havoc before being expelled with few arrests. One protestor was shot and killed. Washington D.C., January 6, 2021. © Peter van Agtmael / Magnum Photos
While the monument honors Washington for playing a monumental role in the revolution for independence, it too, like the scaffolding of the capital building, is representative of our democracy. More specifically, it is representative of our hypocritical democracy as both the Capitol Building and Washington Monument were built by slave labor. In this way, van Agtmael’s image can be seen as a figure desperately trying to reach the heights and ideologies of the United States’ forefathers, and like them miserably failing.

The materiality of democracy and freedom was forged by enslaved people. Yet, even in the midst of calling for a revival of a failed democracy, the insurrectionists chose to cling onto material representative of a democracy they had no part in making. While van Agtmael’s photograph may not be filled with iconic action it invites the viewer into a more intimate portrayal of the drama that is the United States. The late, Noble Prize-Winning author, Toni Morrison once said if you can only be tall because someone’s on their knees, then you have a serious problem. Furthermore, if you only feel empowered by clinging to those you have deemed inferior to support your own freedom, then it is a problem. It asks the question, if you have to cling to something so tightly, was it ever really yours to begin with? If the expansiveness of a country’s lungs came at the shortness of breath of communities, then no one is truly breathing. This assertion is not new, it is deeply rooted in Black Feminist Scholarship. Audre Lourde said that I am not free as long as any persons of color remain chained- nor is anyone of you.

If African Americans are willing to continue upholding democracy, then it is clear that we are the keystone to freedom. This is even more true for Black women, Black Trans Folks, Black sex workers, Black members of the LGBTQ+ community, and people who find themselves on the edge or margins of intersectional identities.

We live in a society that has taught us to work hard for what you want. That if you fight hard then whatever you desire will be yours. The same message applies when it comes to how we are taught to think about love. This line of thinking applies to how we think of the love of one’s self, others, and even of one’s own country. Powerful art that contributes to the sustainment of hypocritical narratives includes not just the camera but language. The insurrectionists, self-identify as patriots because they believe their passion (love) for the United States is what led their actions that day. They loved so hard that they were blinded and failed to realize who they were clinging to.
​
Van Agtmael’s image allows us to ask questions about what happens after the person clinging onto an idea they believed so deeply in falls. The figure in the photograph’s head is turned downwards and it is unclear if the figure is helping someone else come over the edge or not. As a scholar of history, van Agtmael is concerned not just with what happened that day but more so with what follows. By looking at the edges of the iconic images we can see the seams of conflict. Perhaps the edges of the iconic allow us to see the moment before the seams themselves burst. Because while former President Trump told the insurrectionists to “go and go home in peace,” it is impossible to tell what this figure’s right hand will bring with them. The question we need to ask is, what happens when Icarus falls off the edge, but there are thousands more willing to try again?
RETURN