RIAN DUNDON
INTERVIEW AND PHOTOGRAPHS
This interview has been edited for length and clarity.
Truth in Photography:  Talk about yourself, how you got into photography, and what led you on the journey to make this book.

Rian Dundon: In 2004 I was working as a teaching assistant at the International Center of Photography (ICP) with a photographer named Joseph Rodriguez, who taught documentary photo there. I had already studied photography and been practicing a bit, but being at the ICP as a TA, you are a student as well, unofficially. I think that really set me on a good track. Being in that kind of community and educational environment really stimulated me to get serious about what I was going to do next with photography. From there, a year later, I moved to China with an ex-girlfriend of mine who had a job there. I showed up with a couple hundred rolls of film and this idea that I needed to get out of myself, out of my environment to make some work, and I ended up staying there for six years. And that was the first book that I did, which came out in 2012, called Changsha, about where I'd been living in central China in a place called Hunan Province. That project was my first big push, taking pictures every day for six years, just making the pictures, living the pictures, living for the pictures, and developing the kind of messages that I would bring later to projects like Protest City.
TiP: What was the focus of the China project?

Dundon: You know, when you're 24 years old, how much focus can you have? It was 2005 and every headline in the newspaper was about the booming Chinese economy, the new China. I knew underneath that there was something more complex, more subtle, and more nuanced happening. I was also teaching English while I was there to support myself and really just finding my way. But the project came down to being about a personal journey, it came down to being about people that were my age. I ended up gravitating towards young people, youth culture, and the way that different people were navigating new lives in this new China. Which was and is developing and accelerating at such a fast rate.

TiP: What's interesting there is that you were clearly an outsider to the culture you were photographing.

TiP: In undertaking something like that, did you ever think about the truth of what you were photographing or simply being true to yourself, to your own perception?

Dundon: I was trying to be true to myself, trying to find myself as well. Trying to find my legs in photography. By then I was fully cognizant that truth in photography is a slippery slope. So, my awareness of what images are doing and how they function was somewhat developed. But still, it was one step at a time finding a way to make work that was meaningful to me, but that would also be meaningful and accessible to an audience.

TiP: Talk about this idea of truth in photography being a slippery slope. What do you mean by that?

Dundon: During the 2016 election I was living in the Bay Area and working as a photo editor for a news website called Timeline.com. So I was watching the way media, and especially social media, was responding to and facilitating the election process. After Trump was elected there started to be a lot of protesting, in Berkeley especially, and I started photographing some of the street brawls that were happening between right-wing and left-wing activists. In 2019, we moved to Portland for family reasons, and the same thing was happening here. Portland has this kind of siege situation. It's a very progressive leftist city surrounded by very rural red state Oregon, so it's a lot more obvious where you're getting ideological clashes. So, I kept photographing those as they came up. Then, at the end of May 2020, when the George Floyd protests started happening, I saw it as a clear continuation of the project. But it also quickly became clear that these events were on another level. I spent those first hundred days, almost daily, nightly working. And then for the next year, as sporadic events would happen, I would be there to photograph.
TiP: What was your mission? What was your intent? Because it seems that photography about protests comes in a lot of shapes and forms, and it serves different purposes.

Dundon: That's true. That's true. I'm not particularly interested in protest photography as a genre. My interest is in the way that these events and these actions play out in the photograph. I'm not here to amplify any political movement.

TiP: You're trying to be an observer.

Dundon: Yeah. My point is that these things happened. I'm not politically engaged in the sense that I'm there trying to serve that purpose. I think that is a byproduct of it. Or it could be, depending on how the pictures are read or positioned. But I’m not an activist photographer per se.

TiP: Do you think these photographs can evoke change?

Dundon: Probably not. But I'm not even starting from that point of optimism, or I'm not even trying to weigh in on the effectiveness of protests. I think the protest itself is worthy of attention for the act that it is. These are extreme politics. We're getting people at the fringe and that makes for interesting photographs, very emotional photographs. But it also makes for a very complicated space. If you're talking to a lot of the people in these pictures, you're either with them or against them. I think for most people things are a little more nuanced. 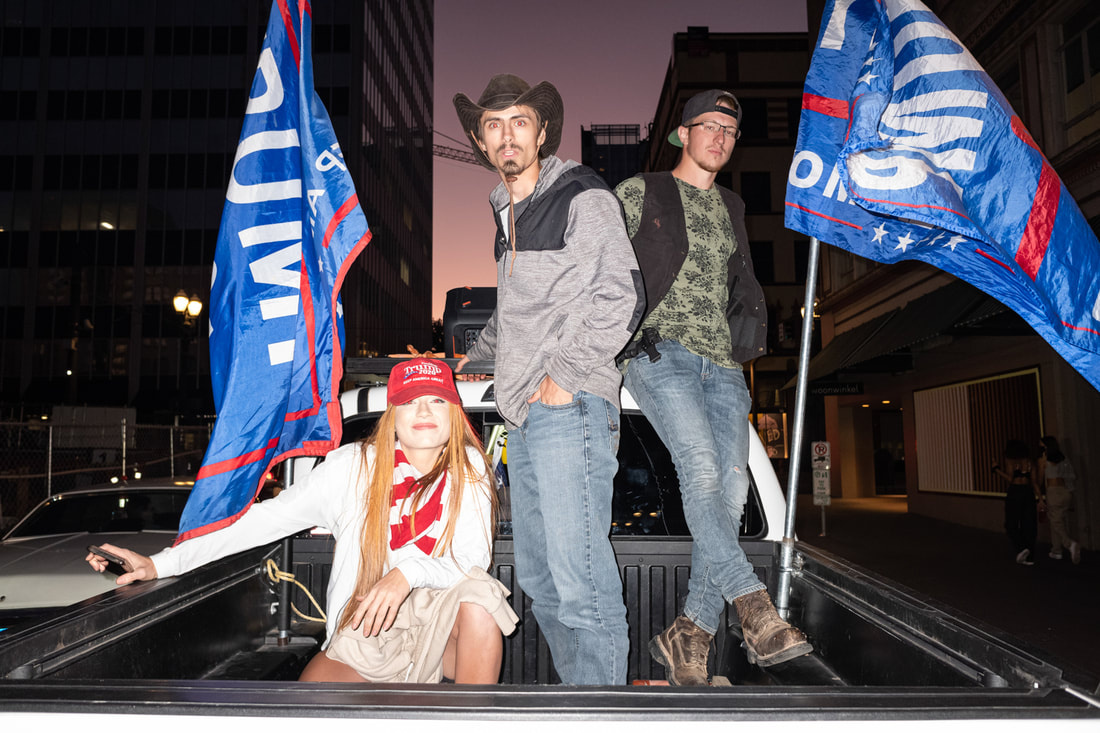 Portland, 2020, from Protest City (Oregon State University Press, 2023) © Rian Dundon
TiP: Another area that I think is not talked about enough is the whole ethics surrounding documentation and how you pursue that. Is everything fair game? Or do you have to make decisions because of the impact that a photograph might have?

Dundon: Oh, is everything fair game? I think most of my colleagues in the journalism world would say yes, but of course, everything is not fair game in the real world. Do you just walk up to people and take their picture? Is that fair game? No. I'm not really a news photographer so I don't have that kind of “If it's happening in public, it's fair game” attitude. I've never believed that. With protests city wide, almost immediately there was this conversation about consent. It played out in terms of, are you blurring people's faces or obscuring their identity because these are political actors and you could be putting their lives in danger at a later date. That was from day one. That was part of the conversation. There's no way I could have been there photographing without keeping that in mind. Everything is about consent, really. And the way you get that was, in this case, one reason there are so many portraits in this project is because I was going around asking people, are you okay with pictures? It wasn't always a drawn-out conversation. Even in these very heated situations, I wanted to make sure I was doing it the right way for that time and for the mood of these events. As I spent more time, people got to know me, and I didn't have to do that as much. Before I never worked like that in such an explicit way, but for this, I really went in with that commitment to do everything with the good graces of the people who were out there.
TiP: The truth in photography is to what extent do we acknowledge how photographs are made, what we do in the cultural context. The truth in photography is what we do not see.

Dundon: What's outside the frame. For me, I have to be a part of what I'm photographing. You're always an outsider on some level, but you have to be engaged.

TiP: How do you feel you interact with people when you are in these heated situations?

Dundon: With respect, taking things seriously. Not sitting there on my phone. Being aware. Being focused. I try not to do things to set myself apart from the people I’m working with. There's a distinction between being a photographer and being part of what you're photographing. Being engaged and just going back night after night after night.

TIP: Talk about the evolution of this project.

Dundon: As the protests developed, I was struck by the sheer number of cameras present at these events, and the fact that sometimes there were more people filming than there were protesting. The gray area between press and participant became even more muddled as the months went on. This project opens up a much bigger conversation because, in a sense, in 2021 or in 2020, the real-life protests were a proxy for a much larger online war that was happening. There's a lot to unpack there. I hope that the project, while it serves as a straight document of these events, can also be read both as a critique of the medium, or of the genre of protest photography, which I'm trying to subvert a little bit here, and also of the way protests are enacted in the 21st century. You can't look at any of this and say it's not performative because everything is being done in front of a multitude of cameras. It brings up questions of what's authentic, what's truthful in not just the images, but in what's happening for the images. 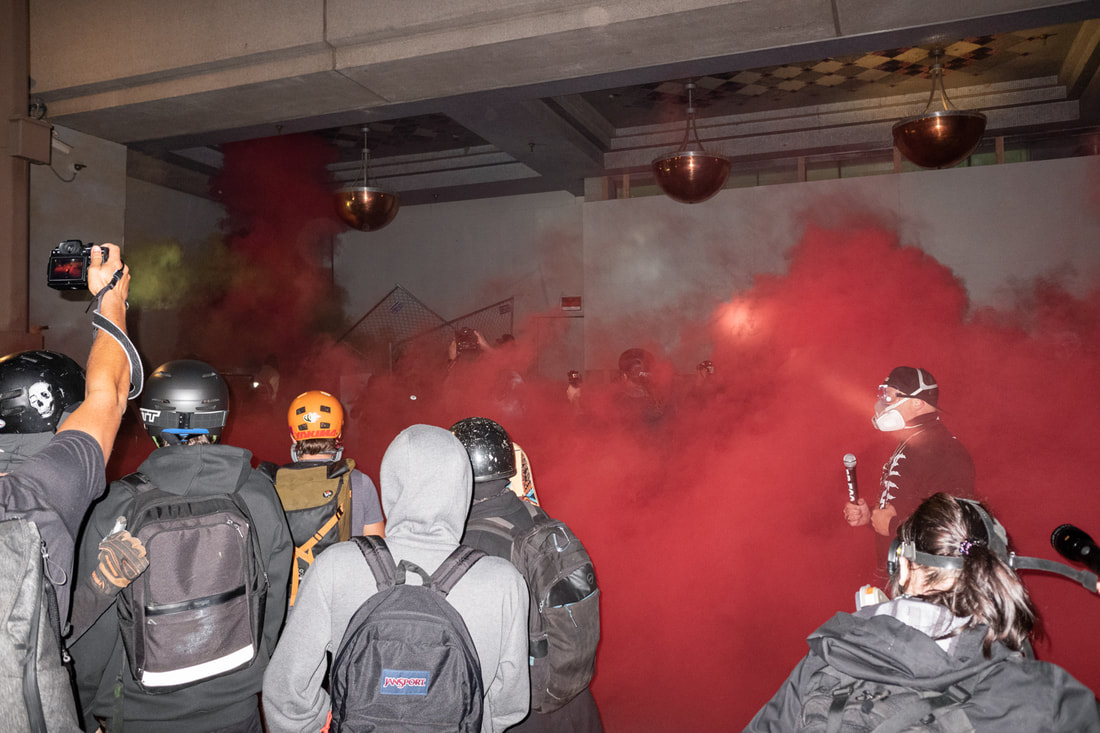