THE ARCHIVE OF PUBLIC PROTEST

INTERVIEW WITH RAFAŁ MILACH
This interview has been edited for length and clarity.

Truth in Photography: Were you the person that started The Archive of Public Protest?

Rafał Milach: It was my idea, but it was rather co-starting because I would never have done it alone. I knew that I had to invite all these photographers that shared a similar status as I had at the time, like being at protests and not being commissioned to document them, but instead being a concerned citizen documenting the protests.

TiP: Why did you feel this need to document these protests?

Milach: Back in 2015 right wing populist government took over the power and since the very beginning started to violate the constitution, politicize the judiciary and many other issues followed. People went out to the streets, and I joined the crowds to make noise, shout out my discord and be part of the community. Only after a while I recalled myself that I’m a photographer and I can channel this energy into the images.
TiP: How do you sustain the protest without social change happening? Even here in the United States, it's difficult to sustain that energy. And the people who are the oppressors understand that sustainability is complicated.

Milach: I wish I had an answer for that. It's super hard, because the protests are connected to high adrenaline, and you cannot be in that state forever. And this is where I see the power of The Archive of Public Protests, because when the protests are gone, the imagery we’ve been collecting can keep the discourse alive. Since not a single issue has been resolved that the protests were advocating for or against, we can animate the archive in various spaces: from exhibitions and performative actions to publishing or conferences. We want to use all possible platforms to communicate about the burning issues we have to face. We also have to think about it in a longer-term perspective since it’s rather a marathon than a sprint. Lot of activists and photographers deal with burnout when the adrenaline drops down, so the self-care is also important in this context. When I think about the agency of the protests and all protest-related activities it’s not as hopeless as it may seem. I believe some deeper processes in terms of social change have been activated. The young generation that has become a core power behind pro-choice or climate change protests and the scale of 2020-2021 women rights movement showed that there is hope. 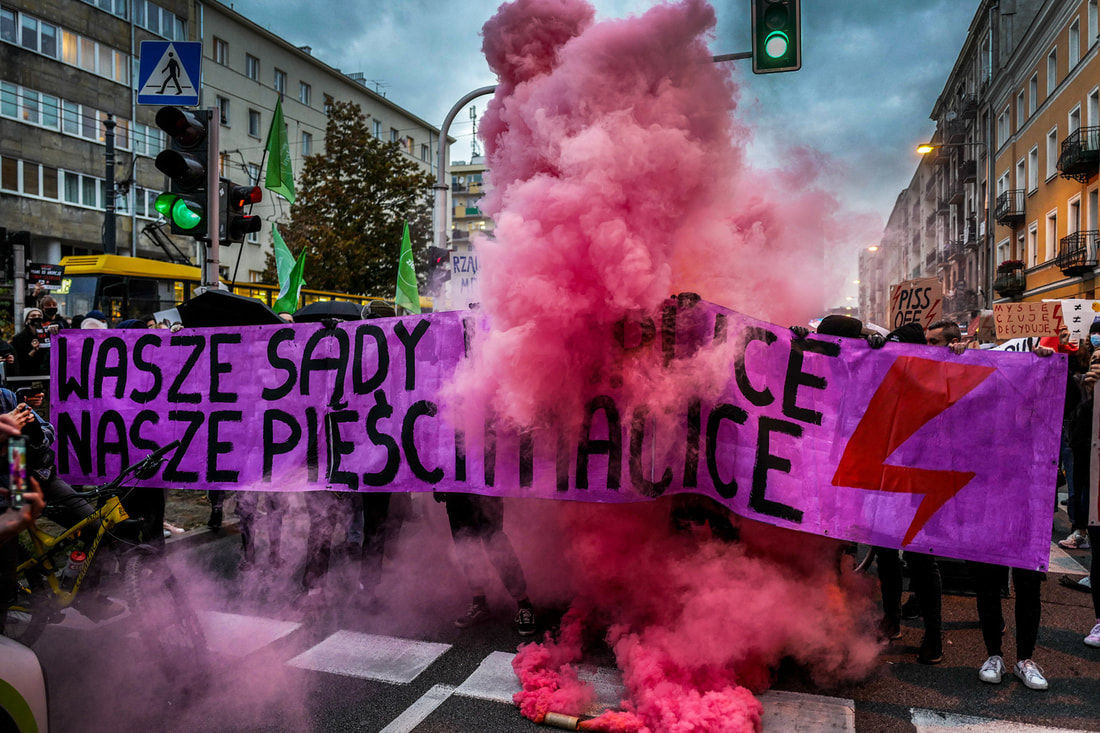 Women's strike. Blockade of the streets of Warsaw. A red smoke bomb covers a banner held by demonstrators. Warsaw, Poland, October 26, 2020. © Chris Niedenthal
TiP: In terms of the archive, what is the focus at this moment?

Milach: At this point, we're still in the streets and we are still documenting since as I said not a single issue has been resolved. Additionally Russian invasion on Ukraine changed the entire geopolitical landscape in the region so we have focused on anti-war and solidarity with Ukraine protests. We’ve just published the Strike Newspaper dedicated to these protests. We’re also participating in museum shows and festivals in Poland and abroad that deal with political issues. We're doing lectures, presentations, interviews and keep distributing the Strike Newspapers. Sometimes I feel like more of a PR person than a photographer, but I want this archive to be visible. We have to keep the discourse alive so it's now part of my job.
TiP: You mentioned the burnout factor. Do you think there's a kind of trauma fatigue?

Milach: Yeah. All combined together. There's a war just behind the corner and there's a real threat that it expands. You just live with this tension even if you know that your situation is incomparably better than the one of your Ukrainian peers. Except of that, we have our local fights too, that were somehow overwhelmed by the war situation, but human rights are still violated, we still have a humanitarian crisis at the Poland-Belarus border, judiciary system is still politicized, right wing populism is spreading not even mentioning the climate catastrophe in the background all that is adding up to this fatigue and burnout for sure. 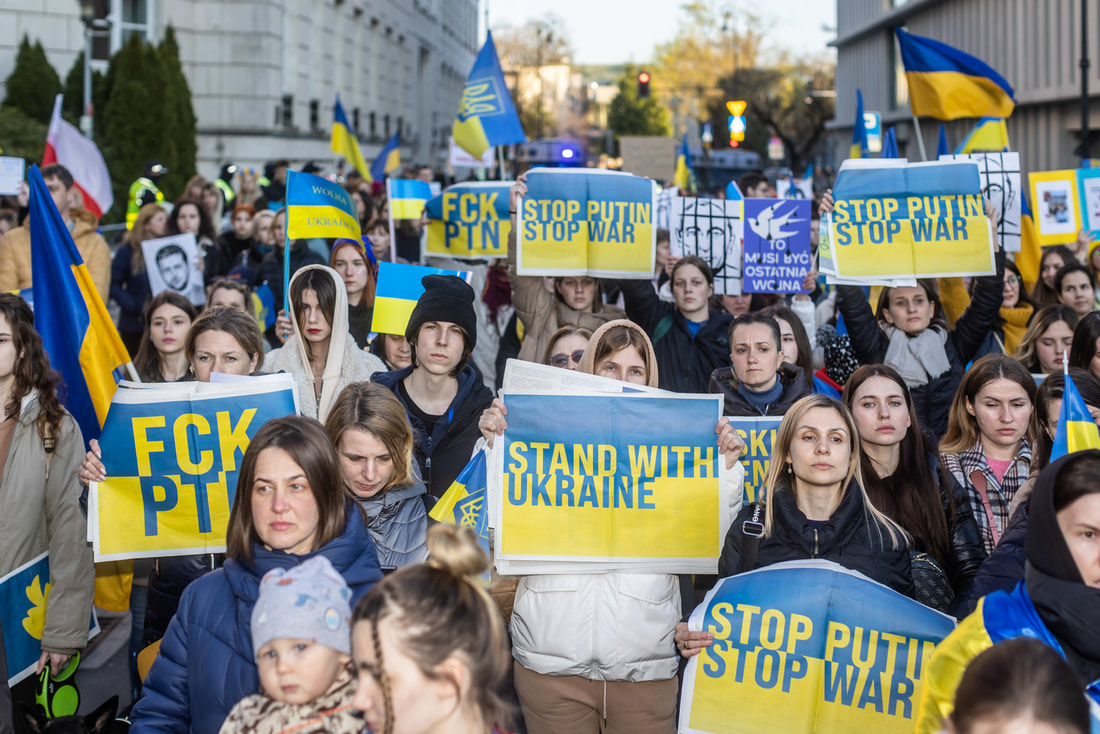 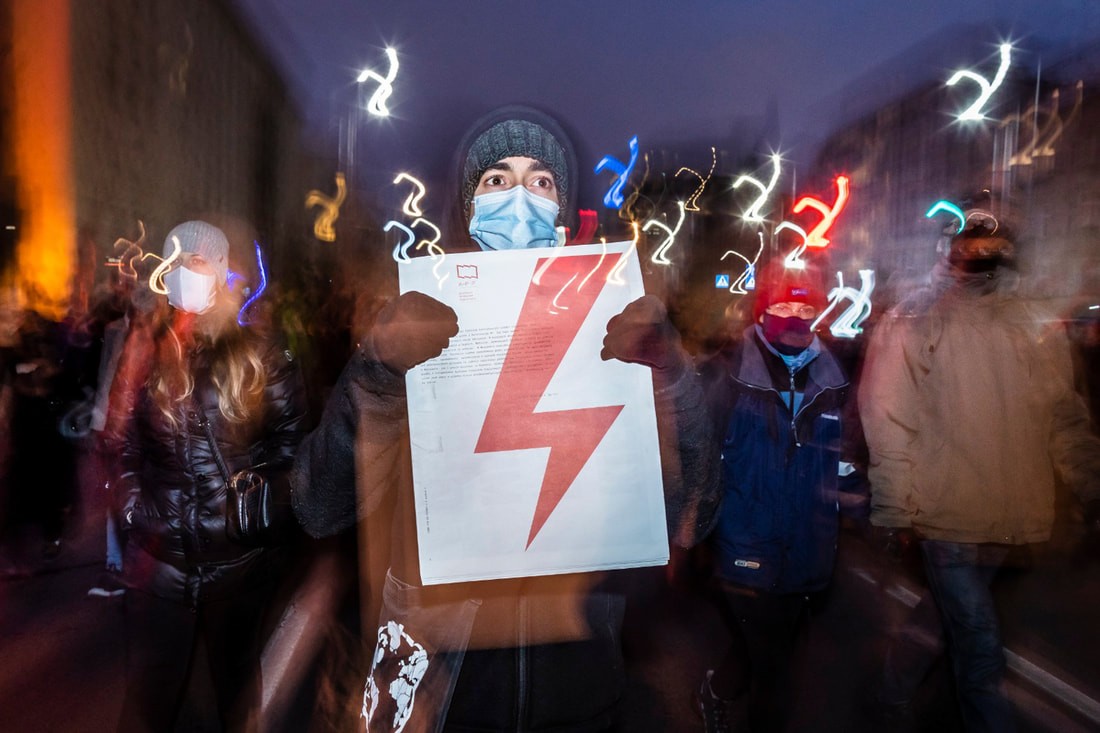 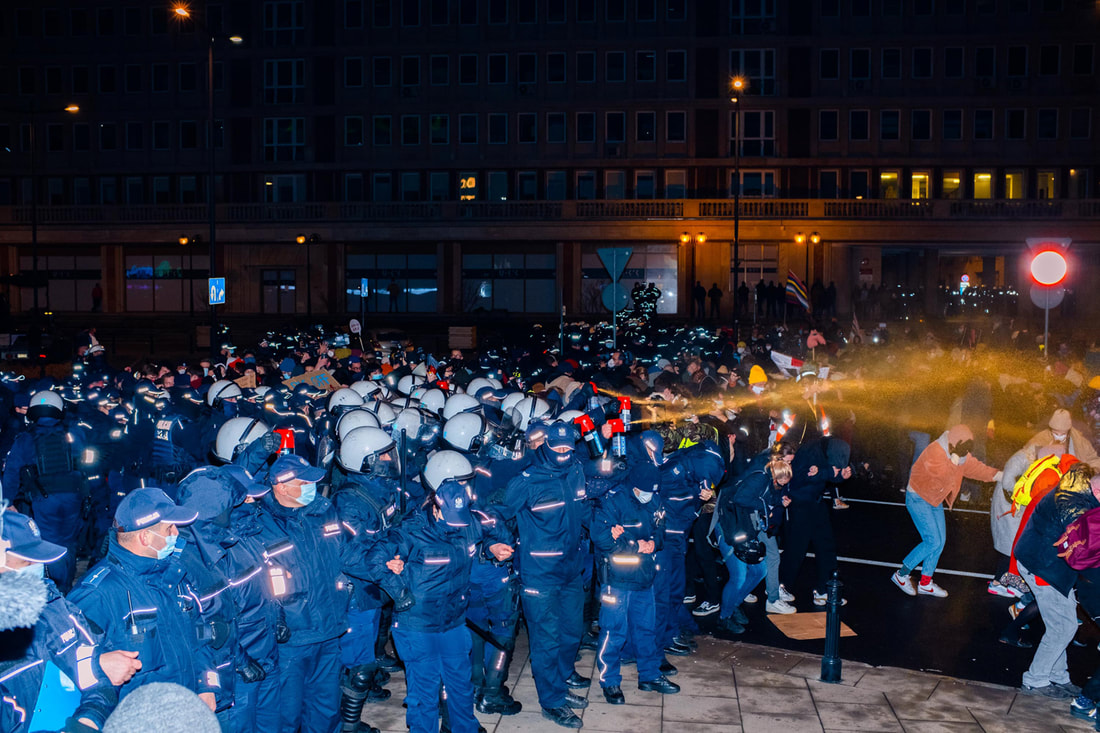 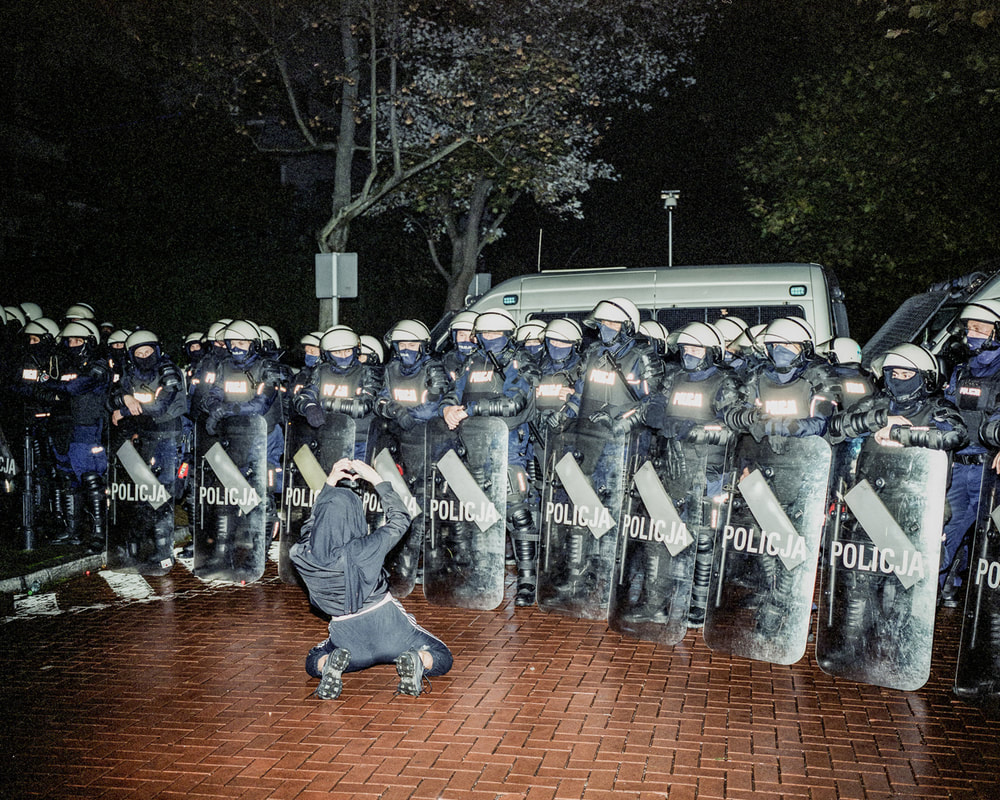 Another day in a wave of Women's Strike protests in Poland, after the Constitutional Tribunal passed a controversial verdict that in practice almost completely prohibits abortion in Poland. Police are guarding a villa where the Polish prime minister and Jarosław Kaczyński are placed. October 23, 2020. © Paweł Starzec 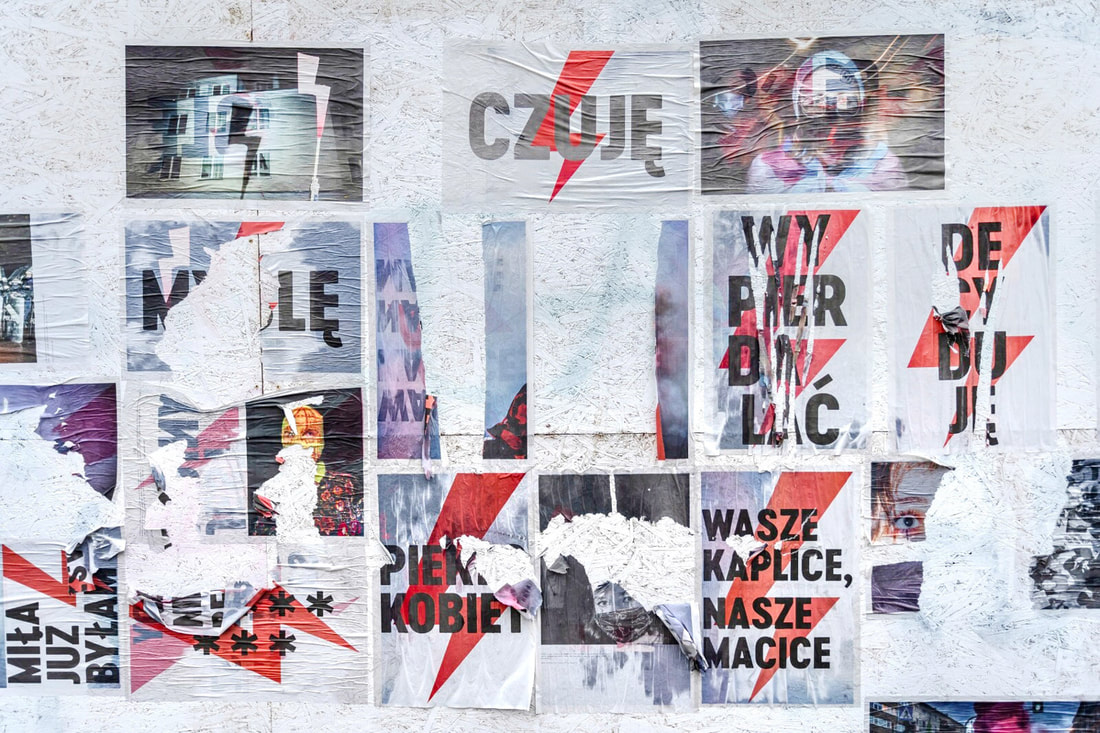 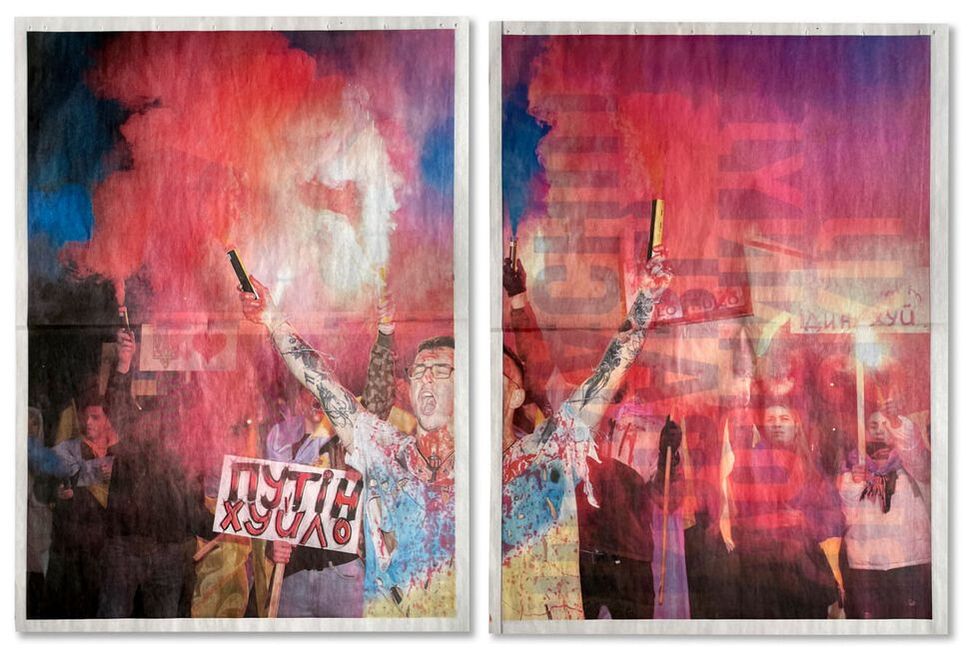 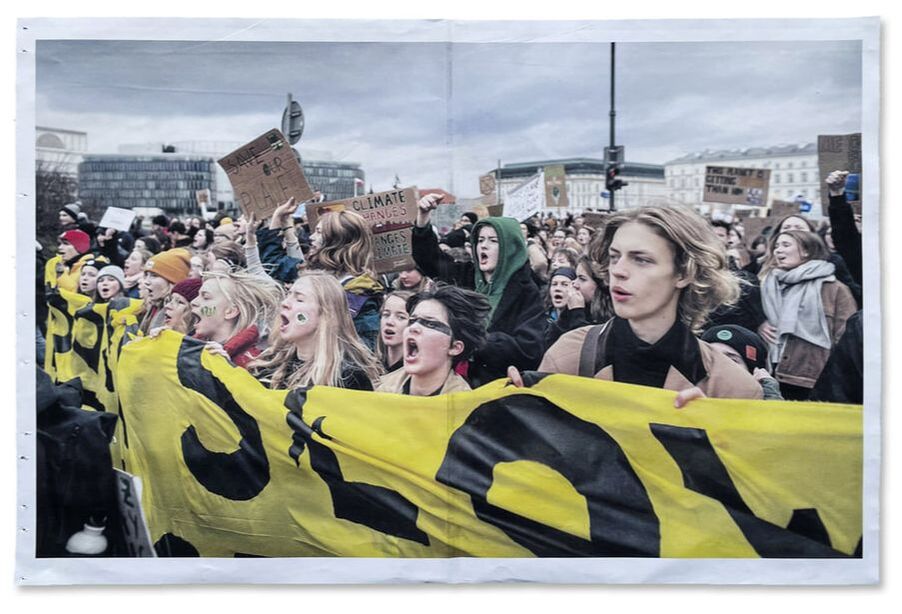